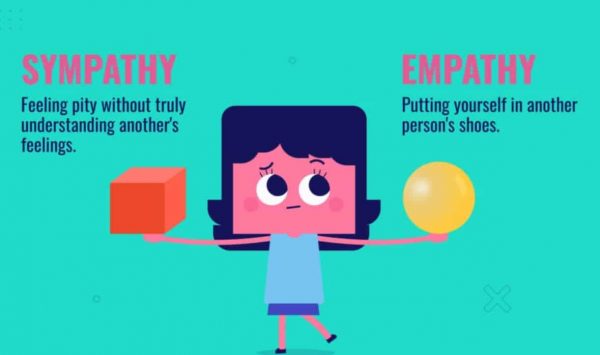 "Empathy is not sympathy"
photo by https://blog.inkforall.com

“Empathy is a choice, and it’s a vulnerable choice. Because in order to connect with you, I have to connect with something in myself that knows that feeling.” ~Brené Brown

Here is a short story:

An angry parent storms into the office of a teacher, yelling about their child’s bad grades. The teacher sits back, listens and, when the parent finishes, says, “I can tell that you love your child very much.”

The parent shifts out of anger instantly and breaks down in tears as they express their underlying fears and concerns. The parent and teacher create a plan to help the student succeed.

There’s no argument from anyone these days that the cultural temperature is boiling over. One needs only spend a few minutes on social media to see someone acting badly – at a shopping mall, on an airplane or really anywhere.

We might think that there’s nothing we can personally do to help stave the heat and reconnect with others again; or that the only thing worth doing is pulling out a phone to record someone’s meltdown or outburst. But there is another way – and that’s the practice of empathy.

In this video Brené Brown discusses four characteristics of empathy:

Empathy is the act of being able to feel, or trying to feel, as another person feels. It requires a powerful imagination to be able to put ourselves not just in the shoes, but in the life, of another person. For example, empathy asks that if you are a man, you imagine what it might be like to be a pregnant woman. If you are a white woman, compassion requires you to imagine being a black boy, driving in a car and seeing a police car pull up behind them. Empathy is not sympathy; it’s not the act of feeling sorry for someone else. Empathy is the act of connecting with someone else so deeply you can feel as they might feel and think as they might think.

2. Staying out of judgment

We often see someone’s behavior or reaction and say decisively: “I would never do that.” But how do we know, exactly? How do we know that if we had the same upbringing, the same constitution, the same life experiences, that we would not respond in the same way we are now judging? We humans spend a lot of time pointing out all that makes us different, using that to make us feel better or superior than others. Empathy is a practice that fosters a sense of equality and oneness. From here we grow in humility, as we realize that we can never know how we might respond in any given circumstance.

Staying out of judgment doesn’t mean we now agree with others’ choices. It’s simply a movement to understand what might be motivating them. Rather than pulling out a camera and recording someone’s “bad behavior,” perhaps we can see behind the behavior to the desperation, fear or denial. Then we can see those things more clearly in ourselves, too.

3. Recognizing emotion in other people and communicating it

Few of us like to admit our capacity for certain emotions – particularly anger, envy and other societally “unapproved” emotions. But indeed, we all have our moments. Most people in the throes of any emotion just want and need to be recognized. Emotions, once acknowledged, often open up vulnerability, letting the truth come out.

4. Feeling with (not for) others

One of the synonyms of empathy is compassion. Compassion is made up of two parts: “Com” (with) and “Passion.” It means to feel passion (emotion) with another person – not watching from a distance, not trying to make it better, not trying to paint a silver lining in it.

Empathy is also not pity – a feeling that comes from disconnection and separation, not connection and belonging. No one feels better when others pity them. When someone dares to access their own emotions and seeks connection, the other person might not feel better, but they feel seen, and that is the beginning of healing.

“When people think you’re dying, they really, really listen to you, instead of just waiting for their turn to speak.” This is a line from the movie Fight Club. It resonates because it reflects our deep desire as human beings to find connection and be heard. Empathy is what is missing in our world, not better comebacks or take downs.

So many of us in this world have become trapped in our own identities. We’ve become what we own, what we believe, what we wear, who we vote for. We are stuck in individual silos from which we view the world from a distance rather than seeing ourselves on the same plane, all participants in the world, all wanting the same things: love, acceptance, belonging, safety, connection. It is too easy to forget that our identities – our race, gender, social class, items we own, etc. – are merely props in the play that keep us believing that we’re all different. That doesn’t see value in a practice such as empathy. We have lost the sense of humanness that connects us all.

Obviously, the practice of empathy is not going to work for every situation. In especially dangerous or volatile situations, sometimes the only thing we can do is remove ourselves. But we don’t always need to fight fire with fire, either. Instead, we can cool the fire down with water – the water of empathy and connection. One person at a time, one moment at a time, empathy is the only way to heal the divisions and misunderstandings among us. Empathy is the way back to our humanness.