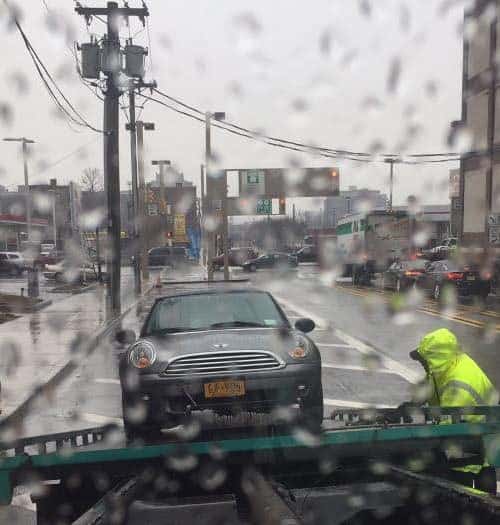 "While traveling over the Manhattan bridge, what I can only describe as a large gray boulder fell off of a truck. I ran over it because there was no way to swerve and avoid it."
photo by Sara Doell

I used to live in New York City: the city that never sleeps, the city that never stops moving, the city that tells you to get the fuck out of the way or you will get run over. While I lived in Brooklyn, I worked in New Jersey so I drove through the Holland Tunnel or over the Verrazano Bridge every day to get to work. Well, except for that one time that a snow plow buried my car in snow and it froze over and was not movable for nine days so I took the subway to New Jersey Transit and then walked a mile uphill to get to work, but I digress.

What better thing to do than take eight million people, put them in a 300.2 square mile area, have only two bridges and two tunnels to get into the city from New Jersey and ask them all to get along? What could possibly go wrong, right?

One day (February 7th, 20I7 to be exact, thanks to a Facebook search) I was making my morning commute from Park Slope, Brooklyn to South Orange, New Jersey and I was having a lovely morning.

While traveling over the Manhattan bridge, what I can only describe as a large gray boulder fell off of a truck. I ran over it because there was no way to swerve and avoid it. It was either cut over into the lane next to me and hit a car or hit the boulder. I chose the boulder. Let’s be honest, it was probably more like a large rock but when you are going 50 mph over a bridge and anything falls off the truck in front of you, it doesn’t matter what size it is, it will startle you.

Wait, this just in – I used Google and discovered that the speed limit on the Manhattan bridge is 35 mph so that is definitely the speed I was going!

So, this enormous rock fell off the truck. I ran over it. I was startled but the car seemed okay. I rolled my window down; I didn’t smell any gas or oil or anything worse than the smell of early morning New York City so I kept going because I was on a bridge and there is no exit ramp that didn’t involve driving my car into the East River.

I took Canal Street across town to the Holland Tunnel and merged smoothly into the tunnel entrance. I was relieved that the car was operating and I was going to make it to the team workout in time with nothing to worry about. Phew. Dodged a bullet. Hit the boulder but dodged a bullet.

I changed the radio station and started jamming to Carrie Underwood when all of a sudden every single red light that could possibly go off in my car did. The acceleration didn’t work. The brakes didn’t work. And my car that was cruising at the legal speed limit of 35 in the tunnel slowed itself down to a complete stop and took a nap in the middle of the tunnel.

Cars started honking. I started to panic. I calmly called 911 and low and behold, I got through. It happened so fast. I told them what was happening. I was panicking and feeling super embarrassed as cars honked. People had to merge to the right lane and they glared at me as they went by as if I was pulled over for a coffee break in the tunnel. I felt the heat in my face as it turned red and I imagined all the people showing up late to their 9am meetings and having to tell their boss some idiot blocked traffic in the tunnel.

I was frightened but this woman calmly came up to my car with a smile to help me literally get out of a jam. As I was pushed out of the tunnel, she waved and I was able to get to the side of the road safely.

I called my insurance company and waited in the car for a tow truck. It started raining and me, a 39-year-old woman, sat there with tears in my eyes, scared and frustrated. I was embarrassed that I had been that person who halted rush hour New York City traffic. I was grossed out because the only place to go to the bathroom while waiting for the tow truck was in the Chevron gas station that could double as a college football port-a-potty at the end of the 4th quarter. I was sad because this was going to cost money that I was not sure I had. And I was happy that I was safe and had not been trampled by the angry drivers.

I sat there in tears for an hour and a car pulled up next to me. I looked and it was the tow truck woman. She had come back after her other towing duties to check on me to see if I was okay. She did not have to do that. She could have pushed me out of the tunnel with a smirk on her face and a roll of her eyes. She could have treated me like an inconvenience. Instead, she reassured me that these things happen all the time, that the tow truck would be there soon and offered me a bottle of water.

The tow truck driver probably doesn’t remember me, that boulder, or the fact it was raining. She likely handles these situations daily.

But I remember her. I appreciate that woman more than she will ever know. She helped make what could have been an extremely unpleasant situation into something tolerable and manageable. She reminded me that the little things matter. The way you treat a complete stranger matters. A smile or a kind word can change the course of someone else’s day.

We are all running into boulders in our lives, some literal, some metaphorical. When a complete stranger helps you move them, it makes a world of difference. Be that person for someone and let someone be that person for you. Kindness matters.