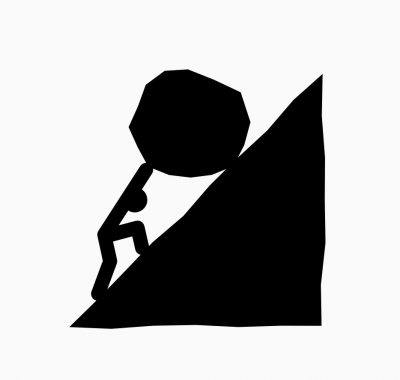 "Will you find a way to make your life meaningful or will you push up against a stone?"
photo by thenounproject.com

In Greek mythology Sisyphus was a king who annoyed the gods with his trickery and arrogance. As punishment, he was condemned for eternity to roll a huge rock up a steep hill in the underworld, only to watch it roll back down. Every Single Time.

There is also a biblical story of God’s request to a man to simply push up against a stone. The man was faithful and unquestioning and everyday tried with all his might to move the stone. After years, and in despair, he asked God why he has failed and why, although he faithfully tried, he has not moved the stone.

God’s reply? ”Oh, that stone was never going to move. Look how strong you got though.”

This story infuriates me. Was I put on the planet with intelligence, abilities and time to blindly follow instructions on a meaningless task? Was I given hard times to develop strength so that I can endure more hard times? Was I given these skills to implement someone else’s master plan?

I would like to believe that a higher power would gift me with talents and time because I was meant to use them in something meaningful. I rather self-righteously hold on to that notion. I am indignant that this is not my purpose or my sentence. Except…

Every day I choose to participate in futile tasks. I spend my talents and my time on things that are easy and comfortable. I know what to expect with this job and these tasks. I roll the stone up a hill. I push up against a stone that was never meant to move. I can say I worked and tried hard.

There is an interpretation to Sisyphus’ story that I like. It is suggested that Sisyphus was handed a test to prove his arrogance and cleverness was warranted. Had Sisyphus simply carried down one stone from the mountain each time, someday there would be no mountain for him to struggle up.

It seems that Sisyphus’ spirit was damaged by his eternal sentence. He gave up on being clever and arrogant. I often feel the same. Life often feels like a meaningless task playing on repeat. It’s Groundhog Day. It’s mundane. Sometimes life is soul crushing.

The cosmos has not outflanked us. We are not being punished for our early days of confidence and spirit. The world is not asking us to give up on our dreams and blindly follow the current of everyday life.

We are being tested. Will you push back against mundane life sentence? Will you question why you are pushing up against the stone? Will you make an effort not to become comfortable with the easy and known? Will you risk being clever and arrogant enough to name your own life sentence?

Will you find a way to make your life meaningful or will you push up against a stone?