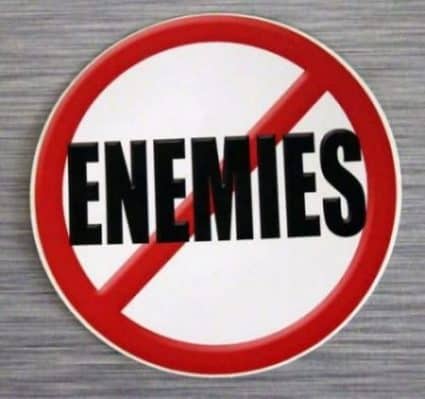 Make friends not enemies, it’s a less expensive way to live life. I have a very bad habit of destroying relationships. That’s not a shot at myself, it’s the truth. I just want you to know this before I tell my story; and I’ll be very brief.

I once had a friend who was willing to help me out with an idea of mine. I wanted to build mobile apps and websites for very specific purposes and he had the means to contribute to allow me to get started. I knew this; however, I had a very bad habit of disrespecting individuals in public for no good reason I also knew this. I disrespected him when he offered to invest in my idea, as well as hit on his girlfriend right in front of him. I wasn’t trying to disrespect him, I just wanted to say what was on my mind.

What I learned from this is actually way more important than the story itself.

First, don’t disrespect people for no reason. I knew then that I didn’t have to say what I did, but decided that it would be best to let what was in my mind be heard. By doing that, I scarred his near-perfect image of me.

Next, people don’t need you. I thought that being rude was okay as long as people needed you; however, that is in not true. We need the people who can help us way more. Never take an individual’s friendship for granted just because you think they want to get something out of the situation.

Last, you’re only making it harder on yourself. I made an enemy out of an individual who I know is going to hold a grudge for a very long time. I know he isn’t going to forget what I said and the fact that I treated him the way I did. I will probably never get an investment from him and that’s okay. At least I got a lesson out of the ordeal!