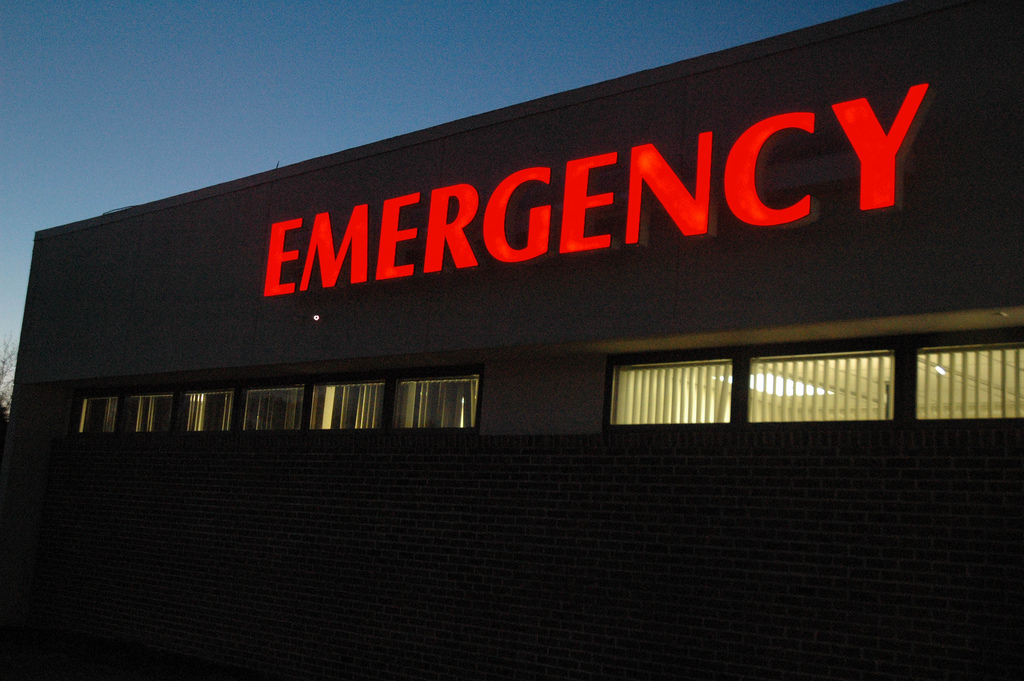 "Without delay I was transported to Lower Keys Hospital emergency room and hooked up to a lot of monitoring devices."
photo by c1.staticflickr.com

Things were pretty ragged for me at my job as a supervisor at a social service agency. I was relatively new to the position and, much to my chagrin, I found out early on that each of my employees had applied for the position I had accepted. Little did I know that I was walking straight into the very bowels of hell. That was when the headaches started. Ruth, the director who had hired me, never let any of us forget that she called the shots. If anyone had a problem, they should skip me and bring their concerns directly to her. I don’t know exactly when the mobility problems started, but apparently everyone else did. One day I walked past an employee in the hallway and bumped against the wall. She wasted no time in phoning the director to tell her that I had come to work drunk. I guess to the untrained eyes it appeared that I was under the influence. Another incident happened during a staff meeting. While making work assignments, my speech suddenly became garbled and I just could not get it together. Instead of inquiring as to my well-being, the director looked pointedly at me and, in front of all of my employees, asked “Are you drunk?” I exhaustedly dropped my head in and despair. Little did I know then that I was having TIAs (transient ischemic attacks), better known as mini-strokes which are usually indicators of a pending stroke.

On July 24, 2010 my husband and I took a well-deserved vacation to the Florida Keys. Our flight was uneventful. During the landing the small “puddle jumper” glided slowly down over the breathtakingly beautiful turquoise waters of the islands – a view that will be indelibly etched on my brain. The Islanders were as warm as the island breeze and always ready to lend a helping hand. We immediately noticed that there was a bustle of activity everywhere we looked. As luck would have it we had unknowingly scheduled our quiet get-a-way during the ever-popular Hemingway Days, a six-day event that celebrates the life and times of prize-winning author Ernest Hemingway. On the first evening of our visit we enjoyed a lovely dinner at a local eatery. The owner was both friendly and gracious, never letting our margaritas dip below half-full. I don’t remember what the entrée was because it was greatly overshadowed by the key lime pie made from limes of the keys. The pie was light with a creamy texture and tart flavor. The dessert was so delicious that my husband whispered to me, “Babe, do you think they would ship some of these things to us in Tallahassee?”

I was up bright and early the next morning for an ocean side run. I had a bad headache but figured I could run through it. Jogging along the water’s edge, I enjoyed the warm ocean breeze on my face. The intoxicating smell of the Atlantic Ocean allowed me to push onward. After four miles I had to turn around and make my way back. By this time the sound of a car horn or God forbid, a screaming fire engine felt like rusty nails being hammered into my brain. My eyesight became blurred and my primary effort was to put one foot in front of the other. Somehow I was able to make it back to the hotel room and a concerned husband. “I just need a nap,” was all I could say as I crawled onto the bed and fell into a sound sleep. I don’t know how long I slept, however when I woke I knew something was very wrong. I wanted some chips, but my arm did not appear long enough to reach the bag. Then I tried to use my left leg to get out of bed but it felt like lead and was having no part of it. I rolled over onto my stomach and tried to stand up on my right leg. Thank God I was able to use my right leg, but when I tried to stand I fell back onto the mattress, flat on my face. Again I pushed myself up using only my right arm for leverage. My left arm was now 8 pounds of dead weight, and again I fell on my face. I called to my husband, “Andy, wake up I think I’m having a stroke.” My husband jumped up and tried to make me stand as if standing would make everything okay. He tried repeatedly until we were both exhausted. “Honey, call 911,” I pleaded. Finally, he relented and called for emergency assistance.

Upon arrival, the EMTs began their assessment. Without delay I was transported to Lower Keys Hospital emergency room and hooked up to a lot of monitoring devices. Sometime during the process, I was given an MRI of my brain. I could not move my toes or fingers and the left side of my face was numb. I could hear Andy asking anyone who passed by about the results of the MRI, only to be repeatedly told, “We are waiting for the doctor to read the results.” While waiting, we noticed a flurry of activity in the cubicle across from my gurney. Unable to contain his curiosity any longer, Andy approached one of the nurses to ask what all the activity was about, and why no one was attending to his wife. As a response, the nurse quickly ushered Andy back to the corner where I lay in a total state of fear and confusion. Andy asked the next person what all the activity was about. This time I heard someone snap, “Can’t you see that we are trying to save a life?” From what Andy was able to glean from passers-by, the young man in the other cubicle was a scuba diver who was suffering from the bends, a painful condition that occurs in scuba divers who ascend too quickly. Also called decompression sickness, the bends results when bubbles from dissolved gasses form in the blood or tissues because of rapidly decreasing pressure. After hours of brisk activity around the young man’s partition, all activity suddenly ceased; “Great.” I thought, “Now I can get some help.”

Again Andy stopped a nurse and pointedly asked, “How much longer before a doctor can attend to my wife?” The woman responded tersely, “It should be soon, the other patient didn’t make it.” I thought, “And then there was one.” As I lay there slipping into and out of sleep, a doctor approached Andy. Thinking that I was asleep, he said, “Mr. Foster, based on what shows up on the MRI your wife probably won’t make it through the night. Your wife has had an acute stroke.” Andy was devastated. For most of the night we consoled each other until I finally fell asleep. As I slept, Andy sat alone looking at the monitors. I awoke to Andy gently squeezing my hand and calling my name. “Did I die?” I asked. “No baby,” Andy replied. We chatted and made plans about leaving the hotel, and how we were going to get back to Tallahassee. Soon the doctor came over and without any greetings or inquiries as to my well-being, turned to my husband and said, “She made it through the night, but she will be a vegetable for the rest of her life.” He continued in a morose tone, “She will be bedridden, requiring constant care.” My husband, totally overwhelmed, asked, “What do we do now? We live as far as you can go in Florida without crossing the Florida-Georgia line.” The doctor replied, “It’s up to you, Mr. Foster. You don’t have many options.” “Am I allowed to drive her home?” Andy asked. “I won’t be held liable,” replied the doctor, who by the way had yet to address me. He only spoke to my husband. After considering his options, Andy said to the doctor, “If you could give her something to help her sleep, I will drive her home.” After the doctor left I reminded my husband that we had not packed our belongings and also needed to check out of the hotel. With a goodbye kiss, Andy left my side for the first time since I arrived at the hospital. After he had left, a heavy cloak of fear and despair fell over me.

Andy packed our belongings from the hotel room and filled the car with gas. I don’t remember very much about the trip but looking back it had to be grueling for my poor Andy. He had over 638 miles ahead of him, ten long hours with only the radio for company. We were trying to make it to a rehabilitation center in Tallahassee but they would only hold the room until 11:00 p.m. As the old saying goes, “We had a long way to go and a short time to get there.”  We got there with only a few minutes to spare.

Fast forward five years. I am sitting in a restaurant with my husband enjoying a great meal. After having two giant frozen margaritas, Andy leaned forward and asked me, “Babe will you drive us home tonight? This drink has a real kick to it.” “Not a problem,” I replied as he tossed me the car keys. It was only after many months of intense physical therapy that I learned to walk again, speak clearly, drive, shop independently and attend social and recreational functions. I am now a retiree who has a vast array of interests; and for a woman who was supposed to be dead or bedridden, life is good. Although the use of my left side is still deficient and maintaining my balance is a work in progress, I still enjoy what I consider to be a happy and productive life. My answer to the question: “What do you do when life knocks you down?” is “Well, you take a deep breath, stand up, smooth your hair, straighten your crown and get right back in the race. Never, ever let someone else determine your destiny.”