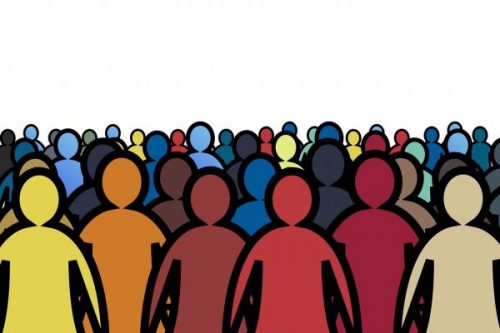 "I could blend into any crowd and make friends quickly, but there was a point that no one got past – even the people I was closest to."
photo by www.maxpixel.net

From an early age through much of my adulthood, I felt like an outsider. I’d always been the odd one in every herd I’d ever run with. When I was a kid, it may have come from relocating often and being the new girl, the one from somewhere else. As an adult, I’ve always had aspects of my life that made me feel different – not shunned or unincluded necessarily – just different from the people I was with: other.

For example, I was the only new student in my senior class in high school. Then, I was the only woman in my unit in an US Army Field Artillery brigade. Later, as a 22-year-old undergrad starting at University of Michigan, I was older than most of the people in my classes. They seemed like kids to me and I felt ancient by comparison. At the same time, I was the youngest parent at my 3-year-old’s preschool and I felt like an overeager child trying to prove how mature and capable I was.

As I got older, I lived in more places, did more things, met more people. I got to know people from all walks of life and from all over the world. I’ve always made friends easily and I built a circle of friends wherever I went but that feeling of being set apart followed me as well. The stories I told myself about why that separateness existed varied depending on the situation and involved everything from age, economic factors, gender, marital status and more. There might have been some truth to those stories but they weren’t the whole truth.

By my early 30’s I’d come to accept that I was some kind of extroverted loner. I could blend into any crowd and make friends quickly, but there was a point that no one got past – even the people I was closest to.

It wasn’t until later, after I’d begun studying belonging and doing some personal growth work, that I began to realize that our sense of belonging doesn’t come from outside of us, it comes from within. In “Daring Greatly” Brené Brown explains how her research uncovered that fitting in and belonging are two very different things.

What I was doing all of those years was fitting in, rather than belonging. This requires us to assimilate and hide pieces of ourselves in order to please other people. I wasn’t even aware that I was doing it a lot of the time, but striving to “people please” and morphing myself into whatever seemed to fit in best was hardwired into me from childhood.

Like many of us, I didn’t grow up having things like managing difficult emotions modeled for me. The adults in my life did their best, but there wasn’t a whole lot of “touchy-feely” emotional talk happening in the 1980’s Rustbelt – at least not in my corner of suburban Detroit. What I learned was that feelings made people uncomfortable.

I learned to shove anything that felt too intense or scary as deep down or far away as I could. This left pieces of me, important parts of who I am and how I feel, buried so deep that they were hard for me to get at myself, much less allow anyone else to see them. Hiding these parts allowed me to fit in, but it left me feeling alone even when I was with people I cared about.

What I know now is that belonging is the opposite of that: it’s allowing yourself to be vulnerable and let people see you for who you really are. This doesn’t necessarily mean we have to wear our deepest, darkest secrets on our sleeves for everyone to see. It just means that to truly feel our sense of belonging we need be fully ourselves and let ourselves be seen that way.

Embracing this type of vulnerability is a practice. I started being more vulnerable in baby steps – first just trying to be more honest about how I felt with those closest to me. It’s not an exact science, by any means. I still have days when I feel the urge to dance to the beat of someone else’s drum, the pressure to be or do or say something that I know isn’t me, just to feel like I fit in. But now I know that making the choice to “fit in” instead of owning the fact that I “belong no matter what” is likely to leave me feeling flat, which makes choosing courage a bit easier.