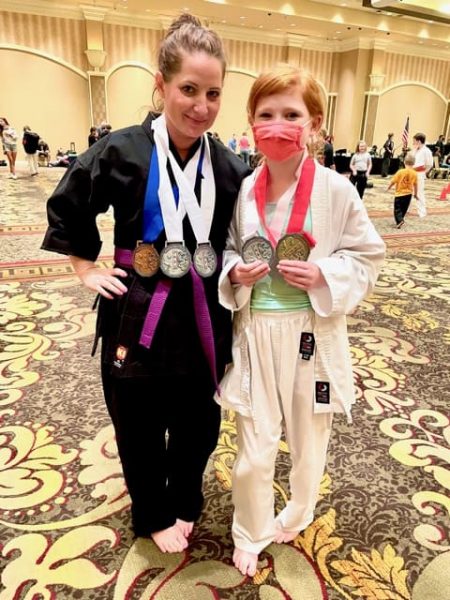 "My body and mind are stronger than a year ago."

In keeping with my goal for this year, I continue to look for things that push me out of my comfort zone. As a recap, my first attempt was to sell items on Amazon without falling into my usual trap of researching the passion right out of the activity. That failed. Research was necessary in this case and now I have 50 lovely necklaces still in my possession.

The second attempt at discomfort was a five-day bike trip across Missouri. That was ambitious. I quit on day two. You could consider it a failure, but I was extremely successful at planning the most uncomfortable activity possible.

The third attempt at discomfort has culminated over the last year. I joined a martial arts dojo. Having no athletic ability and being a 40-year-old woman, just signing up was a bit of a leap for me. During the year I learned to yell, to punch a person with full power, to be punched with full power and endured belt tests that lasted for hours and hours.

Recently our dojo signed up to participate in a martial arts tournament. For months we practiced about six days a week. Every detail of our movement and stances was critiqued. We practiced mean faces, forms and beating each other up. After months of practice, 25 people loaded up in two vans and began the long road trip to Las Vegas.

How did it go?

I spent a total of 48 hours in a van with other people’s kids. This experience was both uncomfortable and an exercise in patience. Food bits, smells, feet and stuff…so much stuff. Why do you need to bring one house slipper for a ride in a car?

Walking the Las Vegas strip in 106-degree heat is uncomfortable, but when you do it with kids you have to pretend it’s great. I spent an entire day gaslighting small children into believing that their complaints of heat were irrational.

After gaslighting children, offer them a pool day that includes shade, snacks and no expectations for walking. A day in a cabana with drinks, sunshine and water probably saved the group dynamic.

At the tournament there were less than ten grown women who weren’t black belts and already goddesses of the Kempo world. I started to feel very self-conscious about practicing in front of anyone. Most of the ladies were likely eight when they learned the forms I would be competing. It’s a hard pill to swallow when you can no longer be the best or the youngest in a crowd.

Speaking of which, the Kempo world needs to update their classifications of age divisions. If you are over 32, you are considered in the seniors age range. Senior. Like discounted coffee and AAA coverage. I would write a strongly worded letter on the topic but being a “Karen” would make me seem old.

Winning karate medals is awesome! Our team cleaned up at this tournament. We picked up medals in nearly every event and dominated the top spots. If attention to detail is your core competency, I suggest martial arts. I brought back medals in all my events! This is the first time that I have won an athletic award where a team wasn’t responsible for the win despite my contribution.

Martial arts has been a great “uncomfortable” activity. The people I’ve met have been gracious and accepting. I’ve made some great dojo friends that turned into great anytime friends. My body and mind are stronger than a year ago. My daughter joined in the fun and now we do classes together. This has been the best uncomfortable experience of the year.