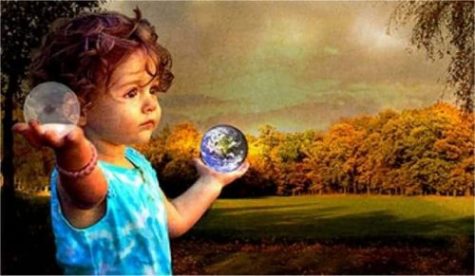 "I encourage you to embrace your little kid, maybe even turn around, open your arms and let her leap back into your heart."
photo by in5d.com

As an only child, I always related better to adults than kids. Adults were orderly and respectful; whereas kids were wild and played games I didn’t understand. Hopscotch? Double Dutch? Truth or Dare? I just didn’t get it. Books and studying were my jam. My best friends were the librarian and the lunch lady. Some things never change.

It wasn’t an issue for me at all until middle-school, which is when kids became cruel. I had two friends that decided to send me a joint letter to “ex-friend” me. It was the 70’s version of being broken up with via text. I still get a little lump in my throat when I think of that moment.

Speaking of cringe-worthy moments, I had neighbors who were two brothers and they were always picking on me. We would call it bullying today, but back then (let’s keep in mind it was still the seventies and I was in 6th grade) we didn’t talk about bullying like we do now. My mom wanted to make me feel better, so she told me it was their way of showing how much they liked me. I’m pretty sure she couldn’t have predicted what happened next, but I thought that was the dumbest thing I ever heard. I decided to put an end to that, so I wrote my first (very practical) love letter. I compassionately explained that I understood what a conundrum they must be in, both liking me so much…but they needed to make a decision as to who was going to be my boyfriend (spoiler alert: neither one of them had any such ideas!). The year that followed that was, well…awkward! That one I actually laugh about now!

We moved the next year and I discovered the joys of friendship, but with that, I started to understand that kids could be even more cruel than I had realized. By the time I reached high school, I began to realize that to get through the day, I needed to be liked. Since I didn’t run with the popular crowd, I learned to hunker down and be small and quiet.

I’ve worked through a lot from those days and I’m aware that my fundamental need to be liked and wanted is self-protective. I run from conflict and run towards comfort. It wasn’t until recently though, that I realized I also have been running away from who I once was and I had slowly forced myself to turn my back on the dorky little kid that I once was because I didn’t feel safe. I decided that she didn’t need somebody else turning away from her, so I started listening and paying attention.

I’ve been listening to her little-kid wisdom for a little while now and what’s coming up are old and forgotten interests. I’ve always liked crystals, they’re pretty and if there’s a chance that their energy can support me, why not? This past year my mom told me that I’ve always loved rocks and crystals…and when I was a little kid, she always had to clean out my pockets before she could do the laundry because they would be full of rocks. How could I have forgotten that?

The other thing that I am being drawn to are essential oils. I’ve been making custom blends for anybody who will let me, and I’m excited to have found a hobby that has organically drawn me in. As I’m reading about and experimenting with them, I have come to realize that for once in my life I am not pushing myself to do something that somebody else expects from me. I’m leaning into the idea that I don’t have to earn the respect and friendship of somebody outside of me.

And so, I encourage you to embrace your little kid, maybe even turn around, open your arms and let her leap back into your heart. You never know where it may lead.