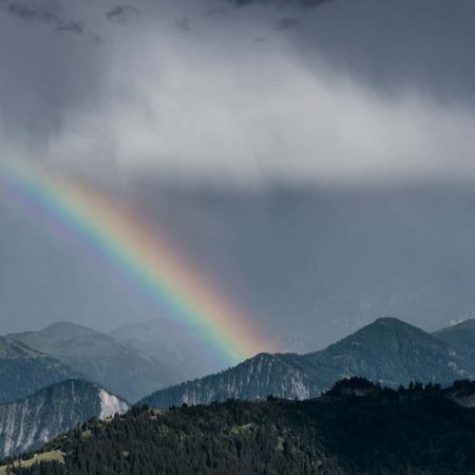 "I had many, many rainbows that evening; but others may have seen it differently."
photo by canva.com

I have a lot to be grateful for. The Northeast got hit hard by Tropical Storm Ida. She took us by surprise, especially since she had passed through several states before hitting New York.

I had been at an all-day training event with clients and was racing to get home before the storm hit – and I did. I am grateful for that because the roads suddenly turned into rivers and flash floods overtook cars and their passengers. When I was driving to the gym two days later the roads were still littered with abandoned cars on the sides of roads, with smashed out windows so the passengers could escape. I cannot even imagine how harrowing that experience must have been for them; and as we gravely know, some did not make it.

At midnight, I was awakened by a loud electrical buzzing sound, to see that electrical flames were shooting out of an outlet in my bedroom. I didn’t know what to do. The burning smell was awful. I am grateful that it did not set my furniture on fire, but only charred it. My larger fear was that there was an electrical fire in the walls.

I spent the next 3 hours trying to get help, and trying to get someone on the phone. I called the emergency line for our building and left two messages. I called Con Edison and waited 30 minutes to speak to someone, who told me they could do nothing to help me. I called 911 – no one was answering 911!!! I called the fire department and only got an answering machine.

At that moment, I realized how easily life could be snuffed out; and sadly, for some it had been. I thought if the outlet had been the one behind my bed, I would have been electrocuted and/or my bedding would have caught fire. I have a fire extinguisher in the living room, but honestly, how long would it have taken me to figure out how to use it? (If it even works anymore.)

At 3am three firemen finally arrived. They told me they had to wade through 4 feet of water to get to me. I was so grateful. They told me not to touch anything and to have an electrician come and check it out. I had to wait 6 days for an electrician to come to assess what happened. His fleet of trucks had been underwater, plus there were others who were in more severe dire straits I’m grateful my power was out in places where it isn’t totally necessary, like a kitchen. I was able to utilize my spare bedroom and bathroom in the interim.

The next day, I looked out the window into the parking lot and I saw dozens of my neighbors working on their cars and drying them out. The storm had also flooded our parking lot. Many cars would no longer start – they are totaled. My car happened to be on higher ground. I am grateful for that.

Mostly I am grateful to be alive and unharmed. Many people have suffered during this storm. My current state is fine and livable and was eventually rectified.

How often do you count your rainbows? I love the quote by Alyssa Knight, “Count your rainbows not your thunderstorms.” I had many, many rainbows that evening; but others may have seen it differently. I witnessed lots of blame directed at the government, the states that didn’t give proper warnings and on and on; however, I’m not sure even if we had been warned we could have done anything but evacuate. Would we? Probably not. We are tough New Yorkers.

Do you know why we blame? Blaming is actually a form of “projection.” We project onto others so that we don’t feel bad ourselves. For example, that night I felt very scared and alone, helpless and vulnerable. There were many people I could have blamed that evening:

Would any of that have been true – that is was their fault? No, of course not! Would it have made me feel better? No. But blame can be a coping mechanism to let our emotions out. If I get all riled up at any of the above, I can let the fear inside of me out – and “project” that emotion onto someone else.

When we become aware of what we are doing and begin to observe, we can easily have gratitude in addition to all the other emotions. I can allow myself to feel them and process them; and I can also find the good in it all.

The next time you are faced with a challenging situation I invite you to look at what was great about it. I have so many things to be grateful for in this situation that I have felt light and happy rather than stressed and angry.

So after very little sleep, I got up to make my morning coffee and my coffeemaker was leaking water all over the place. Probably the thing I needed most in that moment was a hot cup of coffee. Well, guess what? I had a double-sized French Press that was given to me as a gift that I had never used. French Press to the rescue!! I had a great cup of coffee (2 in fact!) and I was really super grateful for that!

Wishing you all Love, Light & Leadership in turbulent times.