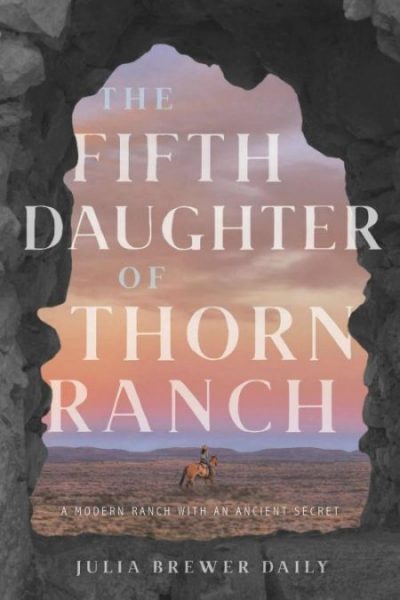 Please enjoy this excerpt from “The Fifth Daughter of thorn Ranch” by Julia Daily.

The winner will be randomly selected on 11/7/22 and announced on our website and social media. *

Emma Rosales is the heiress of the largest ranch in Texas – The Thorn. All the responsibilities of managing a million acres now fall into her fifth-generation hands. A task Emma could handle with her eyes closed…if The Thorn were any ordinary property.
The Thorn is home to many things – clear, cloudless skies, miles of desert scrub and craggy mountains, a quiet disrupted only by whispers of the wind, and an ancient web of secrets that won’t let Emma out alive without a fight.
The Fifth Daughter of Thorn Ranch is a family saga as large as the state of Texas.

Emma swore under her breath and reached down to where her stirrup had been. The leather supporting her foot had torn, and her leg dangled against the horse. Damn, she thought. I should’ve taken a newer saddle. Emma had been so distracted by her argument with Jeff Bower that she was off her game. Now, she was a three-day ride from the barn and unable to exchange any equipment.

Three mornings before, she had lifted her great-grandmother’s saddle from its post, yearning for a connection to her long-gone Abuelita. The leather, hand-tooled by a master artisan, was exquisite, but the worn seat verified someone used it for more than horse shows or parades. Emma imagined her tiny great-grandmother herding cattle from this same perch and shouting commands to the vaqueros. She now fidgeted in her relative’s saddle. Will I ever have her instincts? Emma often questioned her mother about what they required of her.

“You’ll be this operation’s leader,” her mother always told her. “But you’ll often be needed as an extra pair of hands, and you’ll need to know about crops and care for the animals.” There were more than five hundred horses and 7,500 head of cattle, far too many for Emma to say grace over. She wished she could ask her Abuelita Lola if she had ever worried about the expectations placed on her.

Like Lola and generations of Rosales women before her, Emma was an only child and heir to the kingdom surrounding her. Kingdom was a lofty word, but the pressures seemed as great as those faced by the Queen of England. Emma was twenty-two, but often, she felt as if she were twelve. Her hands on the reins dampened at the thought of her responsibilities. Emma felt strong yet insecure, accomplished yet lonely.

She never considered she would do anything other than managing the ranch until recently. Then, Emma began thinking about an animal practice in a small town.

Maybe knowing The Thorn was a million acres and larger than the cities of Los Angeles and New York City combined gave her pause. The Thorn was a living, breathing entity that demanded constant attention.

The ranch had a single fence surrounding 1,600 square miles of the property, spanning eight counties. Since returning from college in the spring, Emma rode the fence line daily. It always needed repair and gave her an excuse for being alone, so she carried a saddlebag of tools. Private rides gave her time to think about her future and were an uninterrupted silence, rare in the hustle and bustle of ranch activities with vaqueros or her parents.

On this ride, she avoided Jeff Bower, as well. She did not want to see him or think about his intentions toward her. Unfortunately, their last shouting match still echoed in her ears. It stung to think he was more interested in owning the ranch than having a relationship with her.

With a firm but gentle hand, Emma pulled the reins and stopped her horse under a tree. It was as if the land took a deep breath and when it exhaled, the scorching air screamed across the expanse. Hives broke out on her neck, exacerbated by a searing pant of blistering wind. Her thick black hair swirled around her face as it escaped its clasp, and she dropped her reins to sweep it back into a ponytail.

Emma scribbled notes in a small spiral-bound book about borders requiring additional barbed wire or fence posts. They’d dispatch a truck for those. It was helpful to keep fences mended, but Emma was more interested in areas on the ranch she’d never seen than in repairing boundaries. There were miles of The Thorn where her mother claimed no one had ever ridden.

Ravenous Grand Canyon-like cavities traversed many sections where the magnificent Pecos and Rio Grande rivers crossed their property. The Rio Grande, which formed the boundary of their land with Mexico, was Texas’s longest river. It was impossible to cross in places because of the swift current—unless you wanted to take your life in your hands.

In the shade of a leafy mesquite tree, heavy with frothy blooms, Emma examined the land more closely. Some of her college friends visited the ranch during school breaks. They hated the rocky terrain, especially those who had moved from states with the perpetual green of pine trees and the shocking purples and pinks of exotic azaleas or camellias.

When Emma visited those same friends in the south or northwest, their landscapes heavy with humidity and swollen with constant rains, she longed for the dryness of her corner of the world. Many thought the desert isolating and unattractive with its low scrubs for trees and cactus plants for foliage. But Emma saw beauty in the desolation.

She guided her horse around gigantic cacti that looked like eerie monuments reaching for the sky. She loved when the prickly pear blossoms were yellow against the spines of its body, and then rich red fruit burst forward.

Emma learned painful lessons from picking the fruit; hair-like needles embedding into her fingers. It took days for the minute spikes to wear out of her flesh. After that, she selected the fruit while wearing thick leather gloves and a hand-held torch to scorch the prickles. Then, her grandmother could handle them to make preserves.

She liked standing at the stove stirring a bright fuchsia syrup from the fruit. Abuelita Valeria, her mother Josie’s parent, placed it into jars to save for the winter, and they spread the luscious jelly on toast in the mornings.

Suddenly, Emma noticed the darkness of the sky. She was far from the ranch house, spending the last three nights on a blanket under the stars. She’d always camped, alone when possible, and with her parents away in Europe for the summer, she was free to come and go as she pleased. Her saddlebag hung behind her, stuffed with beef jerky, Flora’s cookies, and two water bottles. Emma knew where streams and rivers were if she needed refills.

Jagged streaks of lightning filled the sky and thunder rumbled. Fascinated, Emma watched the atmosphere light up like the explosions on the ranch when they celebrated with fireworks.

Skittish, Honey-Boy snorted, and his head darted from side to side. She sped him up, gripping her knees and pushing her weight into the one remaining stirrup for support. Cliffs of red sandstone rose around her trail, and she looked around for a place to shelter. Then, without warning, Honey-Boy lurched into a stumble that took him to the ground.

Emma pitched forward over the horse’s head onto the hard granite soil. She heard a loud snap behind her as she hit the ground. Smacking the hardened, cracked clay, Emma rubbed her cheek and pulled herself to a sitting position. What was that?

NOTE: You can order Julia’s book on Amazon.