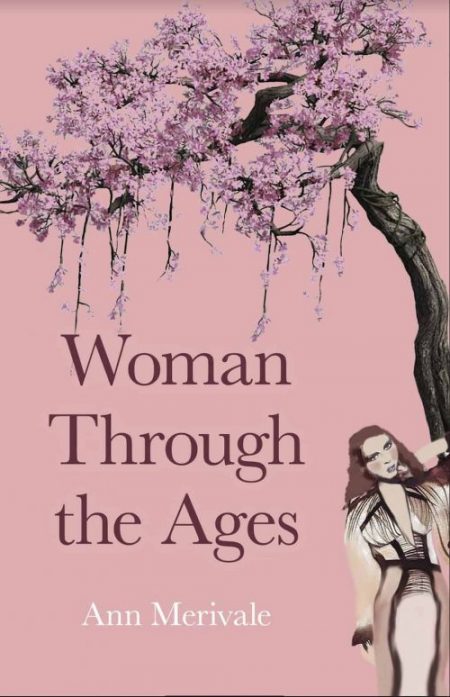 Please enjoy this excerpt from “Woman Through the Ages” by Ann Merivale.

The winner will be randomly selected on 9/12/22 and announced on our website and social media. *

Did you know that the first named piece of writing was the work of a Sumerian woman in approximately 2085 BC, while the world’s first novel was written by a Japanese woman in the eleventh century?

Or that Hildegard of Bingen, the great twelfth-century Abbess, writer, and composer, defied the Church’s traditions by viewing feminine sexuality as a gift of God? Or that one of China’s most powerful Emperors was a woman?

These are but a few examples of the facts in this autobiography with a difference, Woman Through the Ages. Author Ann Merivale, a deep-memory process therapist, has used previous lifetimes in her own history to illustrate the roles we all play in preparation for returning to the source whence we’ve come. Skillfully weaving her personal story into each area and time period covered, Merivale highlights the injustices wrought on women for centuries, as well as their many achievements.

Woman Through the Ages gives a fascinating and comprehensive picture of womanhood through the ages and concludes that the time for equality and greater respect for feminine energy is finally arriving.

When Christopher’s adoption had become certain, we said to the Barnardo’s social worker that we had in mind to take him to Sierra Leone once he was old enough to remember it later and still young enough for the visit to be formative. Ten seemed to us to be a good age for that and, once he’d become closer to that landmark, we decided that David’s Christmas vacation would be the most desirable time of year to be away from England. These days I avoid using such phrases as “It so happened” when something has clearly been organised on the other side! I no longer remember quite how we made friends with Jonathan, a mature student in the Hull University Education Department, but the important thing is that he offered to lend us the house he’d built himself in Waterloo, his home village, just twenty miles from Freetown, where he and his wife both worked and lived with their young children……

….we were totally overwhelmed by the hospitality we received there. Freetown is twinned with Hull (not, I think, the reason for Christopher’s natural father having done his degree there) and so we had a few official visits arranged for us, but it was mostly Jonathan and his family, combined with his friend Frederick on the Twinning Committee, who looked after us. Very much elaboration of our three-week stay would take too long, but – although I’m not sure whether the children have to this day forgiven me for depriving them of a ‘proper Christmas’ (we celebrated with tiny presents, peanuts and oranges on a Freetown beach for lunch and hot peppery soup kindly made by one of Jonathan’s relatives to await our return in the evening) – David and I shall be eternally grateful for the experience.

When we first saw the house that Jonathan had built more or less single-handedly in Waterloo, we were literally gobsmacked by its quality. He had furnished it ‘lavishly’ with everything we could need and before too long I learnt to seize any moment when the electricity was on to start cooking beans and/or other things for dinner. Apart from the Irish priest, we must have been the only white people that the villagers had ever seen, but the ever-outgoing Christopher quickly got involved with football among boys of his age group and in the evenings we loved sitting outside enjoying the warmth and the sounds of drumming in the distance.

We did most of our food shopping in the village market and the incident there that has stuck most firmly in my mind is when we bought a gigantic bunch of bananas (mainly for Christopher, who was a bottomless pit where they were concerned). Inflation in Sierra Leone had got right out of hand and one needed a huge wad of notes for even the smallest of purchases. Well, when my mathematician husband received his change for the bananas, he said “I don’t think you’ve got it right.” He then stood there counting it, calmly ignoring the vendor’s increasingly vociferous protestations. How I wish I could have got a photograph of the young man’s face when David, having completed his calculation, handed him back a big wad of notes!

The word ‘photograph’ still has a sad connotation for us with regard to this West African trip. We’d brought two cameras with us – one for slides and one for prints – and, needless to say, had completed several reels of each. Some of the pictures were fortunately still in the cameras, but, on the eve of our departure, I carefully packed the precious completed reels into a carry-on bag for the flight, together with some other things such as my journal, in which I hoped to continue writing on the return journey. When Jonathan came to take us off for a final-day excursion, I left the bag on the bed, only to find with horror upon our return that it was no longer there. The bag had quite big handles and Jonathan reckoned that the thief had cleverly hooked it out through the top of the slightly open window. (How disappointed must he have been upon discovering the ‘uselessness’ of its contents!)

There is, however, always a reason for everything and this apparent tragedy had at least one good outcome. Sierra Leone had at that time a very acute petrol shortage and the next morning Jonathan had to get us to our flight to Accra in order to take another flight back to London in time for the start of the Hull University term. Freetown airport is right out on a peninsula and reaching it involves either an expensive helicopter flight or taking the car ferry. All too aware of the impending difficulty, Jonathan nobly joined the queue at the petrol station at four o’clock in the morning. He eventually succeeded in filling up at ten o’clock, but then the whole of Freetown came to a total standstill because Momo (the then President) had decided to go out. This was of course long before the advent of mobile phones and we’d had breakfast and finished packing in good time before the appointed hour. Our own anxiety made calming the children difficult and I’ve never prayed harder in my life. Just as we’d reached the point of despair and worked out that we had exactly the right number of traveller’s cheques left to cover the cost of the helicopter, we heard the magical sound of Jonathan’s car. He said “If you get in quick, we should just make it to the ferry.” Sceptically we did as we were bidden, only to be turned out of the car once we’d boarded, as it was quickly filling up with water!

Since there were only a couple of flights a week to Accra, it felt like a ‘life/death’ matter and, once we were off the ferry and had jumped back into the car in spite of the water, Jonathan drove like a madman to the airport, only to be told “Sorry, check-in has finished.” The door to the runway was firmly closed, but Jonathan argued pleadingly in Creole until the man finally relented. We then sped across to the plane before collapsing breathlessly into the five remaining empty seats, which were distributed widely throughout it. As the plane took off and started heading eastwards, I looked down over West Africa with countless feelings and emotions flooding over me. Gradually these began to form themselves into words, eventually becoming an article that got published in the Hull-Freetown Twinning magazine. I sent a copy of it to Mark Young and so began my writing career!

NOTE: You can purchase Ann’s book from Hunt Publishing or on Amazon.