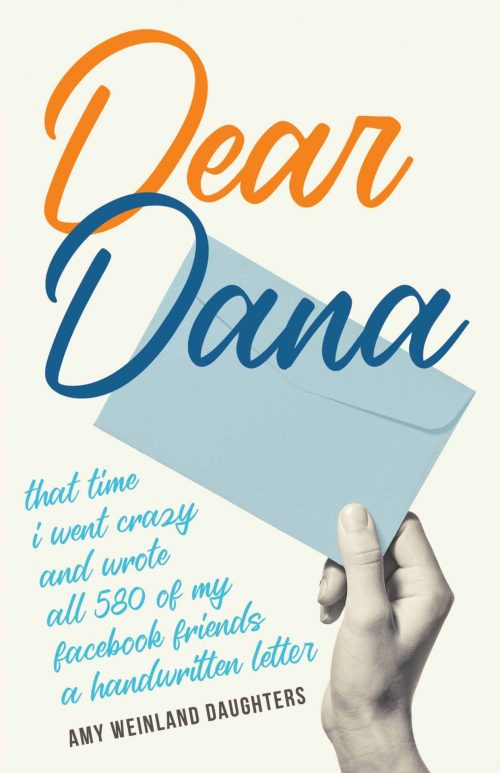 Please enjoy this excerpt from “Dear Dana” by Amy Daughters.

The winner will be randomly selected on 5/16/22 and announced on our website and social media. *

When’s the last time you’ve received a handwritten letter in the mail? The validity of online connections is put to the test when author Amy Daughters does just that in “Dear Dana: That Time I Went Crazy and Wrote All 580 of my Facebook Friends a Handwritten Letter.”

When Amy Daughters reconnected with her old pal Dana on Facebook, she had no idea how it would change her life. Though the two women hadn’t had any contact in 30 years, it didn’t take them long to catch up — and when Amy learned that Dana’s son Parker was doing a second stint at St. Jude battling cancer, she was suddenly inspired to begin writing the pair weekly letters. When Parker died, Amy — not knowing what else to do — continued to write Dana. Eventually, Dana wrote back and the two became pen pals, sharing things through the mail that they had never shared before. The richness of the experience left Amy wondering something: If my life could be so changed by someone I considered “just a Facebook friend,” what would happen if I wrote all my Facebook friends a letter?

A whopping 580 handwritten letters later Amy’s life, and most of all her heart, would never, ever be the same again. As it turned out, there were actual individuals living very real lives behind each social media profile and she was beautifully connected to each of those extraordinary, flawed people for a specific reason. They loved her and she loved them. And nothing — not politics, beliefs or lifestyle — could separate them.

This letter highlights another set of recurring themes I encountered when writing the Facebook letters. First, the recipient was somebody I felt super awkward writing to. Second, because I didn’t really know the person, I would never, ever have expected to hear back from her.

I met #66, a twentysomething-year-old, at my college roommate’s daughter’s wedding. This placed her among my loosest Facebook connections. The potential awkwardness of this category of recipients – people whom I had known in person only very briefly because of a common friend – wasn’t something I thought to be wary of going into the project.

The opening paragraphs of my letter illustrate just how tenuous my personal relationship with #66 was and how my explanation about why I was writing the letters was continuing to evolve.

December 1, 2015
Dear #66,
Greetings! First things first: I hope you remember me, in real life, from Molly’s wedding. To reintroduce myself, in horrible handwriting, I am Nancy’s Texas Tech roommate and friend for life Amy Daughters. So, why in the world am I writing you a letter, on paper, after meeting you at a wedding several years ago? That’s a really good question. Recently, I’ve been wondering what being friends on Facebook is all about. What does it even mean? It all started when I wanted to write a FB friend a few supportive cards as her son was battling cancer. After I wrote the first one, I realized I didn’t know where to send it. I didn’t have her address because, well, she was “just a Facebook friend.” That got me thinking: What is the difference between “real people” and “just FB” people,” or, instead, are they all the same, only I treat them or approach them differently? Then I got really ridiculous and wondered what would happen if I wrote each and every one of my FB fiends a letter. Would I even have anything to say? How many addresses would I have to ask for? Would it be the most awkward thing ever?

Since I thought I’d never hear back from #66, I was astonished when I received her handwritten reply five months later.

April 25, 2016
I’ll just be 100 percent honest: I’m embarrassed that it took me this long to respond, when I was so excited and amazed that you wrote me. It was so fun to get a handwritten letter, especially because it meant something deeper. I actually thought I would write you back way sooner, but it felt like life got crazy, and honestly, the further I got away from the day I received your letter, the less I wanted to write back because I felt embarrassed.

This kind of delayed response time was another common thread in the project. First, so many people who responded to my letter electronically mentioned that they were planning an in-writing reply. Of these, only a small percentage ultimately mailed back a written response.

Next, of the in-writing responses I received, so many began with “I can’t believe how long it took me to write you back.” This was also something I said in most of my telegram responses to in-writing replies.

It’s important to point out that I really did have zero expectations about responses. While yes, I loved hearing back from friends, it wasn’t something that was making it or breaking it for     I came to believe that there must be a certain profile for the people who responded in writing – something in their DNA or the way they were hardwired. It wasn’t that the people who responded were “better” than the ones who didn’t; it’s more that they were born with different character traits. I really wanted the responses to be a reflection of who truly wanted to reply, as opposed to those who felt obligated. It meant that I tried to never, ever ask a recipient if they were going to write me back. That would have skewed the statistical results of the project. As a number’s girl, I wasn’t having any of that.

All of this made #66’s response even more noteworthy. She did write back, despite the delay. And if she hadn’t, she wouldn’t have provided one of the more astute observations on social media to come out of the project:

How funny that we are all so in tune with Facebook posts, updates, etc., yet I really do not know deeply most of the people I am “friends” with there. God has been reminding me to slow down, not because FB is bad or useless, but because we are connected without ever needing to invest.

In the commodity of relationships, investing means depositing something of personal value into another human to achieve a richer connection with them.

This transaction isn’t required for “friendships” on Facebook because they exist in a realm where personal investment is impossible. We simply can’t sacrifice our time, our patience, our grace, our goals, our privacy, or even our freedom in our online relationships. It’s not that we don’t want to give up such things to those we like and even love online; it’s that the surreal nature of social media makes doing so an impossibility. Investing happens only one-on-one, personally, in “real” life. Where Facebook certainly has value and keeps us in touch, it doesn’t allow us to experience the hope and fear associated with risking a part of our very selves for a relationship.

NOTE: You can pre-order “Dear Dana” at Amazon or Barnes & Noble.