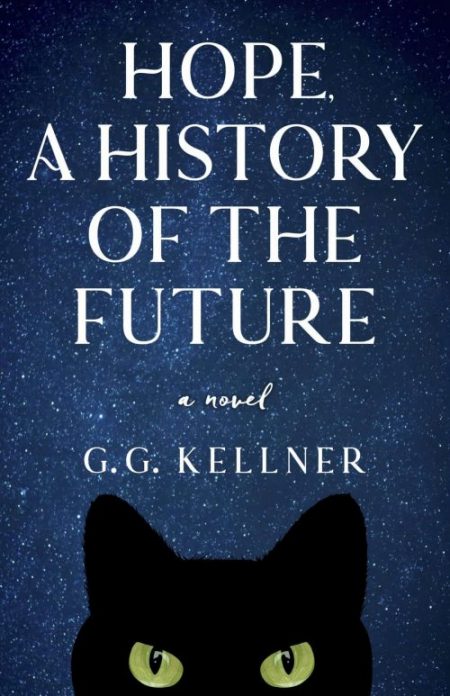 Please enjoy this excerpt from “Hope, A History of the Future” by Gayle Kellner.

The winner will be randomly selected on 4/11/22 and announced on our website and social media. *

“Hope, a History of the Future” has been described as engaging, playful and thought-provoking. It is a seven-generation-spanning epic tale that envisions a future world of peace, justice and verdant sustainability that could arise out of the current world crises. Based on scientific projections, as well as historical and legal precedence, this novel bridges the fact/fiction divide. It will leave readers grappling with questions of destiny, responsibility and the possibility for hope in a future world.

As the various members of the Denzell family explore a history book from the future that has fallen out of time and space into their home, they gradually uncover, with the help of a mystical cat, the story of Gabe, Mia, Ruth and a girl without a name. This is a saga of adventure, endurance, mystery and hope. 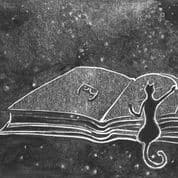 Plato touched his cold black nose to Grace’s arm, sending a small shiver down her spine. As she started to read, he settled down on the pillow next to her and began to purr.

In the spring of 2142, the world prepared to celebrate one hundred years of peace. Le stepped off the boat as it silently docked alongside the wharf. Its solar- powered engines shut down. The large white sails that collected energy were already furling automatically into place. The flag of the world, the round image of Earth from space, floated in the breeze. It was the enduring symbol of the oneness of humanity and the shared commitment to stewardship of the earth.

Le had taken a vow of austerity, the same vow all public representatives took. But the basket she was carrying was still heavy. It contained documents and a few personal items, but the most important things Le carried were in her heart and mind. The documents in her basket were light in comparison to her words. As a Speaker, she was practiced in the art of remembering details. Her early work as a Keeper of stories had helped train her already-keen mind. Sometimes she wished she could forget things—it would be easier.

As Le walked down the long wharf, her indigo robe fluttered open, revealing the talking stick tucked into her belt. Stepping to the ground, she knelt alongside the other travelers. She was greeted by volunteers, young and old, who were moving among the new arrivals like honeybees. They were passing out water for the little ceremonies taking place all around her. Copies of the Universal Bill of Rights and Responsibilities were being handed out too, for those not already carrying them. A young volunteer offered Le both. She smiled and gestured her gratitude, but she only accepted the water. She was already carrying a special copy of the Universal Bill of Rights and Responsibilities—the same copy she had carried with her for over thirty years.

Kneeling on the ground, Le placed her talking stick in front of her. She poured a little of the water out onto the earth where she knelt. “To which we all belong,” she said simply.

Then she repeated the words she had said so many times, words that were being echoed around her by the other new arrivals:

Make me peaceful, make me kind.

Make me peaceful, make me whole.

She drank a little of the water. It tasted fresh and clean and quenched her thirst. Replacing the stopper, she added the bottle to her basket and waited, still kneeling, as was the custom.

An old gentleman wearing a golden armband approached her. He supported himself on a long talking stick of finely decorated wood with elaborately carved symbols. The handle of the staff was shiny from age and use. His eyes were folded in deep pockets beneath his brow, but the centers blazed with light. His broad nose rose like a mountain from the placid plane of his kindly face. His large ears seemed to tune into everything around him. Le had a fleeting thought that she had met him before. There was something familiar about him.

Still kneeling, Le offered her talking stick to him with both hands. Offering a talking stick in this manner in a new community was a sign of peaceful intent and informed the hosts about the traveler.

The old man looked closely at the symbols as he ran his weathered hands over the talking stick’s engraved surface. A large cat with a tail in the shape of a question mark wound itself around his feet.

As he returned the talking stick to Le, he introduced himself: “My name is Gaylord. May peace and love be with you.” His fingers moved gracefully through the gestures, despite his age.

“I am Le,” she said, rising and offering her hand.

Gaylord’s long gray hair and beard were neatly trimmed and bound. Had he been standing completely upright, Le would have had to look up to see his face. But age had brought him closer to the earth. He appeared to be in a perpetual motion of bowing with gratitude. Le speculated that he was very old. Perhaps even born sometime during The Great Change.

Grace’s door opened. Her mother poked her head in. “How are you feeling, sweetie? I brought you some crackers and . . . where did you get that book? Her mom asked, in a voice Grace noticed was a note higher than normal.

The color ran out of her mother’s face as she hurried over and set the crackers and tea on the bedside table before taking the book and abruptly closing the cover.

“You need your rest, and this isn’t going to help you get any.”

She carried the heavy book to the dresser near the door, then went back to feel her daughter’s forehead.

“You’re still warm.”
She got a wet washcloth and laid it across Grace’s brow.

“This will help cool you off. I’ll check in on you a little later.”

Grace gratefully slid down in bed. The wet ends of the washcloth dripping onto her pillow made a cool spot for her to rest her hot cheeks.

Joyce tackled the big book on the dresser and carried it out of the room with her. She shut the door behind her and leaned her head back against the outside of the door in the hallway.

How did this book get in there? she wondered.
She eyed Plato, who was gazing up at her.
“Did you have something to do with this?” she asked the cat.
Plato just stared at her and twitched his tail from side to side, ticktock, ticktock, in rhythm with the grandfather clock she could hear innocently marking time in the library.

NOTE: You can pre-order this book at Amazon or Barnes & Noble.