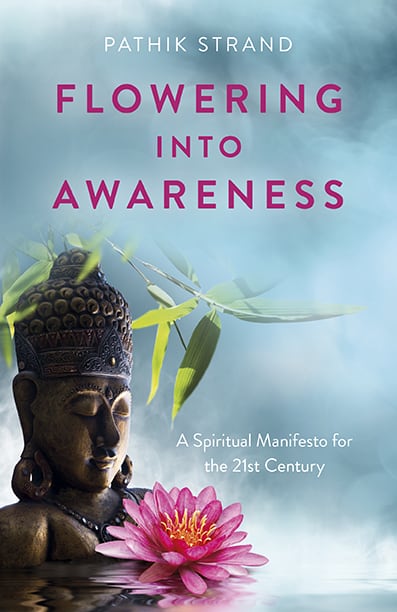 Please enjoy this excerpt from “Flowering into Awareness” by Pathik Strand.

The winner will be randomly selected on 2/7/22 and announced on our website and social media. *

Flowering into Awareness is a collection of passionate and inspiring essays on the nature of reality as seen from the perspective of the unity of all life. It explains the non-dual vision of life in a clear and straightforward way and also puts that understanding into the context of life’s numerous challenges and the problematic state of the world. In an urgent and heartfelt manner, this book outlines the root causes of humanity’s challenges and also explains what it will take to evolve from our present state of ignorance and conflict into realizing the full flowering of our highest potential.

This book is written as an attempt to help you answer the question of who you are in a direct and authentic way and also to make you understand how the realization of your true nature is the key to the transformation of human consciousness and the emergence of a new world of peace and harmony. The full flowering of humanity’s potential, in fact our ultimate destiny, depends precisely on the dawning of this realization on human consciousness.

Peace on Earth will never come about through political maneuvering, but by the deep and authentic knowing that your true nature is universal consciousness in which everything arises, exists and disappears. “Flowering into Awareness” is the perfect companion for everyone who is passionate about freedom and for anyone who is dedicated to the magnificent exploration of ever-expanding spiritual transformation. If you are ready and willing to question all answers, this book is for you.

Excerpt from Chapter 1: … and the truth will set you free

A deep and experiential knowledge of who we are as well as the consistent and passionate manifestation of unconditional love in our lives are of the utmost importance for our deeply troubled world to change from chaos, pain, misery and conflict into a world overflowing with creativity, love and happiness. Yes, I am absolutely convinced that this is possible, and as we go along I will try to explain to you why that is so and what it will take.

To give you a feeling of where I’m coming from, maybe we could try a little experiment using your imagination. Imagine that you are living in a world where there is no war, conflict, violence, hate, dishonesty, fear, greed, exploitation, poverty, pollution or any of all the other horrors that our world is presently so full of. Imagine that your home planet is one of harmony, joy, love, peace, freedom and boundless creativity. Everybody is kind, helpful and cooperative, and nature is treated with love, respect and sensitivity, instead of being exploited, raped and destroyed. Imagine what a joyous, beautiful and fulfilling life this would be for everybody. Now imagine that for whatever reason you have to go and live on planet Earth during the first few decades of the 21st century, directly and personally experiencing all the misery, problems and pain of our world. Wouldn’t you feel as if you had entered a madhouse, a world that is so completely and utterly insane that you wouldn’t have thought that it was possible if you hadn’t experienced it for yourself?

A severely dysfunctional world of unbelievable complexity, endless conflicts, environmental destruction and exceptional misery is unfortunately precisely the kind of world we have created and are presently living in, yet we have become so accustomed to it that we hardly ever think of the world as mad. It is as if most of us have become blind to the insanity that is now so prevalent, so completely ubiquitous in all areas of life, that we consider it all perfectly normal. Well, it is actually normal in the sense that our collective madness is so common that it is the norm, but that hardly makes it sane. We seem to have accepted this kind of lunatic world as something inevitable, even natural, but it is of course neither inevitable nor natural.

Whenever abject and despicable human behaviour like hate, greed, jealousy, exploitation, dishonesty and so on rears its ugly head, we tend to think of it as human nature, but nothing could be further from the truth. Human nature is most definitely not one of greed, hate, fear and all the rest of it. If anything, what is natural for humans is to manifest love, peace, cooperation, kindness, harmony and honesty. These are all qualities that are given to us quite abundantly by life itself, in fact they are natural expressions of what we truly are. However, for the most part we seem to do our best to cover them up as much as we possibly can, opting instead for selfishness, possessiveness, insensitivity, greed and fear.

It doesn’t have to be like this. There is another way, a way in which we can all live peacefully and harmoniously, in abundant creativity, with great love for all life. All our neurotic and dysfunctional behaviour is possible only because we insist on remaining ignorant of our true nature, of who we are. It is self-knowledge in the most fundamental sense that is lacking in our world. That is the root cause of all our woes and problems. Everything else flows from this basic core of ignorance of who we are in essence.

For most of known human history, the majority of people have been completely convinced that they are an ego, a separate entity, and that we all have to fight and struggle endlessly for our survival and prosperity. This conviction has been so powerful that most people have never even thought to question whether this is the case or not. It is this fundamental misunderstanding that gives rise to selfishness, which in turn produces greed, fear and all the rest of it. As long as we define ourselves as a separate entity, an ego, belonging to a particular race, religion, nation, family, political or social group and so on, or we think of who we are in terms of career, accomplishments, personal talents or suchlike, the madness will continue in one form or another.

What we fundamentally are has nothing to do with any of the above. Our true nature is that of pure, luminous, limitless, impersonal, universal consciousness. There is only ever one consciousness, and it is in fact exactly the so-called ordinary consciousness that is aware of these words and their meaning. The full knowledge, understanding and embodiment of this simple fact won’t give you worldly riches, superhuman powers, great charisma or a halo round your head, but it does have the potential to change your life in ways that you might not have expected. I should also add that this kind of understanding isn’t really a personal achievement, something you can get for yourself, but more on that later. Once a majority of humanity arrives at this understanding and lets go of the old, false identification with ego and limited self, life on Earth will start to be transformed for the better in ways we cannot even begin to imagine.

However, it is important to understand that what we call the ego isn’t necessarily and inherently bad or evil. It becomes a problem only to the degree that it is taken as one’s primary identity. The ego is only a makeshift identity, and there is actually no core unique ego or person inside you somewhere that is always fixed. The ego is in a state of continuous flux, and even in the seemingly most selfish of us, it isn’t always there. At the very least, in deep dreamless sleep, there is no ego, in fact there is no experience or world at all in the way we usually think of it, only the profound peace and silence of the being that you truly are. When I use the word ego in this book, it is only to make it easier to refer to that process within us that in various forms manifests as greed, fear, selfishness and so on. The ego itself is neither good nor bad, because it’s just a temporary fluctuation of thoughts, memories, feelings, habits and conditioning. It should naturally and effortlessly cease to exist whenever it’s not needed, but because virtually everybody takes it as their personal identity, it seems to be there almost all the time. We all make use of this kind of fictional ego entity, and even the most highly revered spiritual masters engage with the process of ego, but that’s not a problem as long as it’s not taken as one’s true identity.

A different aspect of mistaking one’s true identity to be a separate ego-self located somewhere inside your head so to speak is the unquestioned assumption that what we usually think of as the material world or the physical universe is the true, fundamental reality, and that it exists independently of consciousness. It automatically follows on from this belief that mind and consciousness are nothing but by-products of some inexplicable process in the human brain.

Many philosophers and religious pundits have argued against the philosophy of materialism, and you may well be familiar with the ancient Indian concept of Maya, which essentially says that the world of the senses is illusory. That is of course the polar opposite of maintaining that the world as we see it is ultimately real. However, it is much closer to the truth to see the world as real, but only in the sense of being a manifestation or modulation of universal consciousness. In other words, what we think of as physical reality is not the source of consciousness and neither is the world we live in an illusion. Quite the contrary, the world of the senses is certainly real, but only by virtue of ultimately being an expression of consciousness itself.

Seeing the so-called material world as existing independently of consciousness, and seeing oneself as a separate entity in this world are but two sides of the same coin. This kind of materialist self-centredness will inevitably bring about self-deception, illusion, ignorance, separation and conflict, and is the root cause of all the world’s problems and whatever challenges humanity may be facing.

NOTE: You can purchase “Flowering into Awareness” at John Hunt Publishing.