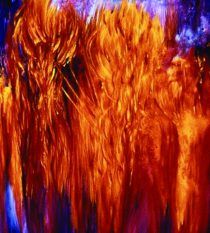 Am I dreaming or am I watching…in slow motion…people are milling around…
they’re watching Cathedrals burn, and no one is doing anything to stop it.

They’re not moving toward the fires to put them out,
they believe their hands are tied and there’s nothing they can do.
But there’s no rope, not even a string dangling from their wrists to hold them back.
Others are cheering as the flames leap higher, cameras are filming…
The world is watching.

Mesmerized, the citizens can’t make sense of the burning, unable to grasp
what it means for their life and their future. Afraid to discover the truth,
they observe without action and push aside the unthinkable drama
that’s playing in front of them.

Cathedrals’ interiors are ablaze. Traditions of order that once held the sacred
and protected hopes and evolutionary dreams from the heart of mankind
are gutted. It’s a senseless burning of times that once knew the way.

Arsonists, unaware that they’re torching their fate, as well as others,
and changing direction without a care. They refuse to open their eyes and hearts
while the burning of ideals are exploding their future.
They lost the guiding confidence from within their soul and gave their power
over to a consensual destructive misunderstanding of life.
Their souls become scorched beyond recognition,
and unable to recover from the smoke that fills their brain.

Many civilizations have fallen, cultures destroyed, libraries burned and the words
of inspiration turned to ash. Fear manifesting as the need to control,
always attempts to tear down what was never understood or embodied,
and buries what was there under rubble and broken stone.

Peace easily joins the world. But for now it awaits to be invited –
by the heart and soul of humanity – so it may flow freely, inspiring hearts
to rise from the ashes and take flight to touch the stars.