"I can’t help but admire how unapologetically “crazy” she portrays herself."
photo by www.billboard.com

There is something both beautiful and terrifying about exploring the thoughts and emotions of a teenage girl. Typically raised to be kind and obedient, teenage girls often learn to shame themselves into hiding what they feel.

Although I can’t speak to every teenage girl in the world, I would like to dive into an artist whom many teenage girls find to be their new ambassador. I’ve said many times since listening to Olivia Rodrigo‘s new album “SOUR” that I can’t help but admire how unapologetically “crazy” she portrays herself. This response is one typically expected from those within her demographic, yet she still chose to release all of the bitterness and resentment that comes along with being a heartbroken, “crazy” teenage girl. When someone who relates to her situation listens to this collection of breakup anthems they can see she isn’t insane at all; she’s simply hurting and she’s being honest about it.

It is all too easy for women to be objectified and dismissed upon a stereotype for any form of self-expression or interest. This is why many who don’t understand intend to insult Olivia by calling her the next Taylor Swift (who also shares a very special place in my playlists) because they don’t hide their heartbreak and people believe they should.

This is not to generalize the emotions of teenage girls in any way, nor to shame women who do not fit this stereotypical mold of what exactly a teenage girl is; but if you’ve lived it, I believe you understand what I’m saying here. Another woman I admire is poet Olivia Gatwood, who explores this in her poem “When I Say That We Are All Teen Girls.” She talks about how relevant and necessary teen girls are to our life experience, saying that so much of what we do is a reflection of this stereotypical model. From wrenches to mountains to businessmen, there will always be a reflection of the teen girl experience (or at least the same behaviors teen girls are shamed for). 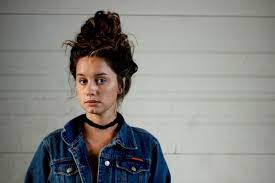 In this exploration I explore this sense of community, not only being occasionally SOUR as Olivia Rodrigo shows, but in being kind, self-aware and indulgent. Every individual shares these qualities to some degree, or at least has that capability. So, who are the teenage girls and how are they perceived?

The answer is simple: teenage girls are understood as the label they are given by others. The most prevalent reason they are ridiculed for their actions and feelings is because they resonate with everyone else. They are named dramatic and overbearing for managing their lives the best they know how and are used as scapegoats for the insecurities of others.

It’s truly ridiculous to misunderstand teen girls for lacking any real substance or depth, as they are so prevalently labeled. Yes, SOUR is a breakup album – the perfect collection of songs to scream while driving down the interstate. But it’s more than that – just like Taylor Swift, Olivia Gatwood and every teen girl. There’s “hope ur ok,” a song of sincere nostalgia and reflection; there’s “jealousy, jealousy,” a song of insecurity and envying strangers. Both are universal feelings of personhood.

The reason the emotions of teen girls are both terrifying and beautiful to explore is because they represent everyone. They ridicule one another almost as badly as everyone else does. They may create the stereotypes, but the ones who put weight in them are the ones who need to change. Teenage girl here, but we do the same things all of you do. Maybe I’m biased. But aren’t we all?