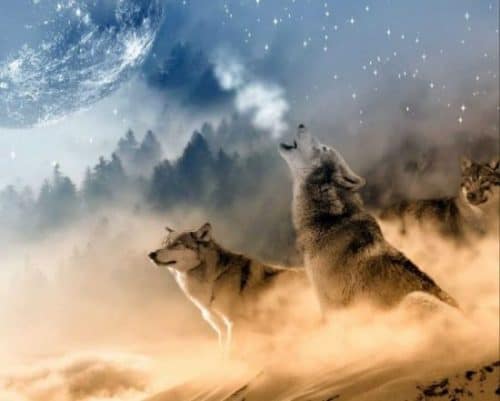 "There is an “Alpha” who is the leader of the pack and all the way at the end of the line there is an “Omega” who is at the very bottom of the hierarchy."
photo by canva.com

Are you familiar with Alpha and Omega energies? If you are like me, perhaps you have ‘heard’ of it but may not know a whole lot about it. When I began to explore this topic – it blew my mind.

In work life and in wildlife, there is a “status” and a pecking order whether we realize it or not. In the wild, whether it be wolves or lions or other packs of animals, there is an “Alpha” who is the leader of the pack. All the way at the end of the line there is an “Omega” who is at the very bottom of the hierarchy, who is afraid of the others in the pack and is passive and submissive.

We can observe this quite easily in the wild. Imagine a pack of wolves. The Alpha eats first and then allows the pack to feast on their kill; but the Omega must wait. He must sit and wait until all the others have had their fill, and if anything is left over, he will be allowed to eat the scraps. This is his life. Always. In fact, most times the Omega does not get enough food to eat and does not survive. Can you imagine? The Omega does not survive due to his passive energy and fear. Wow.

The Omega Wolf doesn’t look directly at the Alpha Wolf. He keeps his head down. His movements are fast and appear nervous. If another wolf passes him, he steps backwards and out of its way. If the other wolves move towards him, he rolls to one side or onto his back and lifts up his paws to expose his belly. In effect, he is saying, “Please, please don’t hurt me.”

Learning all of this was a wake-up call for me. Is there a part of you that can relate to this? You may say this is extreme, this doesn’t happen to humans, except we are always unconsciously sizing up people. We unconsciously wonder where they sit in our hierarchy. Are they better than us? Are they beneath us? We don’t even realize that we are doing this. It’s an automatic pattern that is instinctual in us. It started as a “safety” measure at the beginning of human life, but has become part of how our minds and intuition work. Animals do this to keep themselves safe, “Is this a predator or an ally or just a non-threatening species?” Yet, as human’s we take this instinct in us way too far. You may even be thinking about all the bullying that is going on today…this is a form of the Alpha and Omega dynamic.

I realized it had happened to me. Whoa. Yes. I had a highly Alpha boss. There were quite a few Omegas he had chosen over the years – one at a time. His Omegas changed as either people left their roles, changed roles, moved into other departments within the company, someone Human Resources may have swooped in, or they just left the company. I was his latest Omega. His behavior was toxic and abusive for a long time, and one day this behavior just broke me. Literally. I had some sort of a breakdown. After that I said to myself, “I cannot take this behavior any longer, despite the consequences I may face.” I stood up to him. Things got better for a while, but he found new ways to be the Alpha (taking away a big part of my bonus) and eventually eliminating my role. Now you may say, “OMG, I’m never going to stand up to my boss or anyone at work because I may suffer the same consequences.”

Yet there was a flip side to this story. We don’t live in a pack of wolves where survival is our only need. We have the ability to break away from the pack. When this happened, I made a promise to myself to stop being so afraid of being an entrepreneur. Thus began my exit strategy from the company and I began my business strategy for my new life and career. You see, when we are true to ourselves and our heart’s desires, the universe has our back. It will lay the path for us. All we need to do is to trust in this concept; even though that’s not always an easy thing to do.

The other lesson I learned is that I never wanted to feel like the Omega again. EVER. It felt awful. It kept me up at night. I was so afraid of conflict, confrontation and friction that I sacrificed who I was as a dynamic, amazing human being. I adapted a submissive stance, until I could no longer do so. It broke me, mentally and physically. Then my needs became greater than my fears. My true authentic self stood up for me, and suddenly the consequences didn’t matter. All that mattered was being authentically me in that moment. THAT became a matter of my own survival. I would no longer accept this treatment in any form.

Now, as a Certified Coach, I also know about our mind’s conditioning. (I knew that something from my childhood set up this Omega pattern for me.) I am aware that I may unconsciously revert to that Omega state again, because it’s actually comfortable, (this is what happens when we are raised a certain way – our behaviors that do NOT serve us actually become comfortable). I know if I am going to have a successful business and live my best life, I need to get out of that comfort zone. This means there may be conflict and friction from time to time; and there may be confrontation. People may not always think I am “nice.” But that is OK, I’m carving my own way now. I left the pack of wolves behind and have embarked on my own journey which may feel scary at times, but it feels so much better than any Alpha or Omega situation ever would.