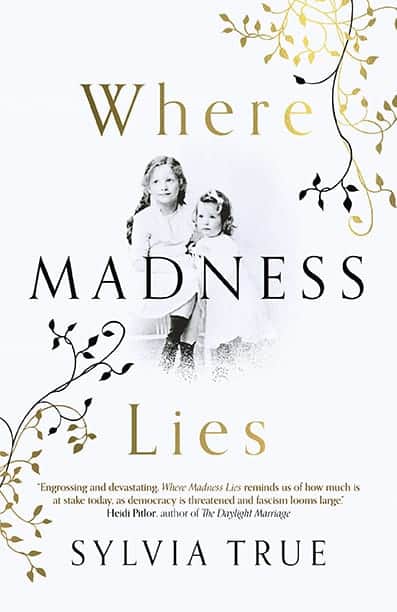 Please enjoy this excerpt from “Where Madness Lies” by Sylvia True.

There are 2 ways to enter to win a FREE signed hard copy:

Winner will be randomly selected on 3/1/21 and announced on our website and social media. *

Germany, 1934. Rigmor, a young Jewish woman is a patient at Sonnenstein, a premier psychiatric institution known for their curative treatments. But with the tide of eugenics and the Nazis’ rise to power, Rigmor is swept up in a campaign to rid Germany of the mentally ill.

USA, 1984. Sabine, battling crippling panic and depression commits herself to McLean Hospital, but in doing so she has unwittingly agreed to give up her baby.

Linking these two generations of women is Inga, who did everything in her power to help her sister, Rigmor. Now with her granddaughter, Sabine, Inga is given a second chance to free someone she loves from oppressive forces, both within and without.

This is a story about hope and redemption, about what we pass on, both genetically and culturally. It is about the high price of repression, and how one woman, who lost nearly everything, must be willing to reveal the failures of the past in order to save future generations.

With chilling echoes of our time, Where Madness Lies is based on a true story of the author’s own family.

Every morning after Inga woke, she did her exercises, had her one cup of coffee with one sugar, and got dressed as if she had somewhere important to go.

She lived in her small flat in Basel near the train station. In nineteen-forty, the rumbling often woke her, and her first thought was always that of a bomb.

The world had lost its mind. Switzerland shuddered daily from fear and blitz attacks too close to its borders.

She visited cafes and shops, and it was the treatment she received from store owners, from waitresses, from book sellers, that helped fortify her. Her hair was always nicely done. She wore pearl earrings and a pearl necklace, and people spoke to her as if she was someone. They curtseyed and bowed and made sure her table was wiped clean. She didn’t speak their Swiss dialect yet and was initially worried they would judge her for being German, but it was rare that she received a dismissive glance. It was the working-class people who saved her, who greeted her kindly when she had only scattered dust inside of her.

The pain didn’t lessen as much as it changed form. Once a scorching fire, it was now a hollow reed.

She was not a mother.

She had no country. No home. No friends.

In time, she trained herself to stop. Stop thinking. Thoughts of Frankfurt, Arnold, Sonnenstein, or Rigmor still crept in. But each time, she imagined a red stoplight, and forbade herself to continue. Some days the stoplight came up a hundred or more times. Still, she maintained the practice, and on good days she barely saw the red light at all.

Eleven months after Rigmor’s death, Inga felt strong enough to visit Arlesheim. She took a tram and walked to the chalet for Lisbet’s fifth birthday.

There were two young mothers with their children sitting at the round dining room table with cups of tea. Frieda greeted Inga in front of the guests as if she were a cherished family member, telling the other women that Inga was the mother of Lisbet and a highly educated world traveler. The truth was somewhere in between.

The other children were young skaters whom Lisbet had met during her lessons.

“They are not nearly as gifted as Lisbet,” Frieda said to Inga, not quietly enough. One of the mothers turned. Frieda gave a polite smile. “Her instructor has told me he has never seen a child take to the ice the way Lisbet has.”

As soon as the guests left, Frieda refused to look at or speak to Inga. At dinner, when Frieda wanted the salt, she faced Lisbet and said, “Could you tell your mother to pass the salt?”

Inga laughed. “I can hear you,” she told Frieda, who ignored her.

“Tell your mother if she chooses to stay away for almost a year, I will not speak to her for twice that time.”

Lisbet, her small face quivering, looked at Inga. “My grandmother,” she began, and burst into tears.

Frieda opened her arms, and Lisbet jumped into them. “There, there, my dear girl. It’s nothing but a small disagreement. Isn’t that correct, Inga?”

“Yes, nothing to be upset over,” Inga said.

Frieda put Lisbet to bed, and Inga washed the dishes. It was nearly eight, time to get back to her flat, but she didn’t want to leave. Being in a home that had visitors, that had a child, that had life, even if it also had Frieda, connected Inga to a world she had severed herself from.

“You are still here,” Frieda said, as she walked to the buffet cabinet to get her whiskey.

Inga ran a finger along the tablecloth. “I was thinking,” she began, and stopped. “I know I stayed away, and I am sorry for that. But now that I am back…”

Frieda finished her drink. “And?”

“I thought it might be good if I moved back in.”

Frieda let out a heavy sigh. “Why did you stay away so long?”

Inga couldn’t find the words. She managed to say, “I shouldn’t have.”

“The child thinks she has no mother,” Frieda said.

“It would be good for Lisbet to see her mother more than once a year, but there are rules in this household.”

Frieda nodded. “But know one thing,” she said.

“I cannot forgive you.”

Inga moved back in the following week. Some days were passable, even pleasant, especially when she could play hide-and-seek with Lisbet, who never seemed to tire of the game. But much too often, Lisbet clung to Frieda, who made no secret about her dislike of Inga.

When it felt intolerable, Inga retreated to her flat in the city, for a week, sometimes a month, sometimes longer. She took up painting lessons at the art museum, learned how to play bridge, and began to see other men, not seriously, but to help fill the void. Four was the maximum number of times she would sleep with someone. After that, it might slide into more serious territory, and she wasn’t looking for serious. She had Fred for that.

The war went from bad to worse to devastating, and Inga had to stop reading newspapers or listening to the wireless.

But it was impossible to shut the world out completely. Fred always had his stories, and there was talk in art class, and on the streets. All around her, even in neutral Switzerland, people staggered and sagged under the weight of loss.

Through it all – through the defeat of humanity, through Lisbet’s growth spurts, through Frieda’s callousness, through Fred’s coming and going, Inga got up every morning, did her exercises – had her one cup of coffee with one sugar, and got dressed as if she had somewhere important to go.

NOTE: You can purchase Sylvia’s book from John Hunt Publishing or on Amazon.