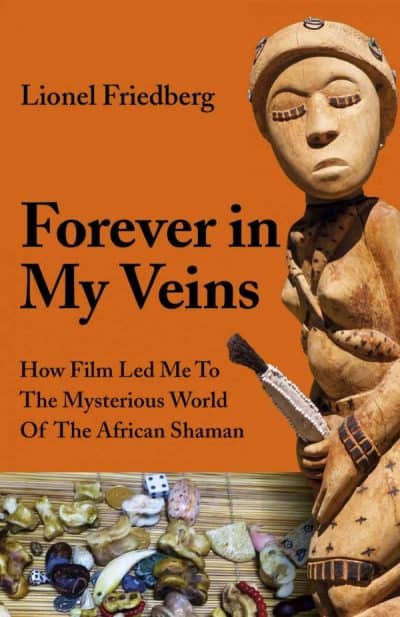 Please enjoy this excerpt from “Forever in My Veins” by Lionel Friedberg.

There are 2 ways to enter to win your FREE signed hard copy:

Winner will be randomly selected on 1/18/21 and announced on our website and social media. *

Emmy Award-winning producer and New York Times bestselling author Lionel Friedberg has spent 50 years making films as diverse as full-length theatrical features and television documentaries. After growing up in South Africa during the troubled era of apartheid, he began his career during the dying days of colonialism in Central Africa.

He eventually settled in Los Angeles where his work took him to the sound stages of Hollywood and to the most remote regions of the Earth. His career exposed him to the extraordinary wonders of our planet and brought him into close contact with many unforgettable personalities from maverick scientists to politicians, entertainers and people who survived near-death experiences.

His observations have taught him that life is far more complex and infinitely stranger than we can imagine. When he was struck by an unexpected life-threatening illness, his efforts to find a way to save his life took him back to Africa, where he encountered the age-old rituals and powerful healing methods of African shamans. Their mysterious ways have much to teach us and are as relevant today as they were in ancient times.

Once we reached the shores of Fundudzi we were all politely asked to remove our shoes as a token of respect towards the ancestral spirits. We duly did so, setting up our camera and sound recording equipment while we waited for the ceremonies to begin. The headman, his helpers and musicians—about a dozen young men and women—undressed and then girded themselves with skirts of leaves and various other regalia, including shell necklaces, deer antlers, rattles and body paint. They looked fabulous, especially in the clear, crisp light of morning against the background panorama of the shimmering lake. It was an ethereal and very beautiful scene, the atmosphere charged with something strange and indefinable. Mishack whispered to me that he felt sure the tribal spirits were present and watching us. After an hour of waiting I began to worry because there was still no sign of the priest. According to headman Netshiavu he was to have been fetched from his secret home deep in the surrounding hills by a couple of Netshiavu’s senior male relatives. At last the party arrived. The mere sight of the priest was spellbinding. A hush fell over the entire assembly as a thin, wrinkled, wiry, ancient, grey-haired, hunched-over little man, hardly able to walk, hobbled through the bushes, supported on either side by one of the headman’s assistants. His eyes were glazed over. Surely, I thought, he must be blind. It must have been a very long time since those eyes had witnessed anything. Mishack came over and told me that the old man was also virtually deaf. Headman Netshiavu, dressed in a girdle of fresh leaves and a grass skirt, fell to the ground, clapped his hands and greeted the priest respectfully with the traditional, “Ndau.” Then, through a translator who had to shout loudly into his left ear, the old priest was introduced to Peter Becker, to the crew and then to me.

Peter was fascinated by the old man. His eyes filled with tears as he shook his hand. As I said earlier, Peter was a very spiritual man. He was deeply tuned in to the metaphysical realm. He was sensitive to the ritualistic beliefs and religious practices of all the tribal people he encountered but I had never before seen him become so emotionally moved as he did when he met that old Venda priest. Here was a man beyond a name and an identity. Here was someone who had stepped out of the pages of Africa’s ancient past; a mysterious, unknowable individual who was acquainted with things that we ordinary mortals were unable to even contemplate. As Peter chatted to him through the interpreter we were astonished to learn that he was over a hundred years old. He remembered seeing the old Transvaal Republic’s President Paul Kruger in his horse-drawn carriage during a parade in Pretoria when he was a youngster. This, he told us, was “before the war started with the English.” It was easy to figure that one out. If it had happened before the Anglo-Boer War the man must definitely have been well over a century old.

We were told that we had to observe strict silence during the proceedings. The only person other than the priest who was allowed to speak was Peter. The plan was to have him on camera for part of the time, describing the action and its significance. I positioned him near the camera about thirty feet or so from the old priest. This would allow me to focus on the ritual then zoom back to include Peter in the scene. As I was showing Peter where to stand he inadvertently stubbed his big toe against a sharp rock and winced in pain. Meanwhile, the ceremonies began to get under way. In the background, musicians were blowing on antler horns and pounding on drums as the old priest held his hands high, faced the lake and wailed softly. Then he picked up one of the calabashes of home-brewed beer which he proceeded to pour slowly into the waters, all the while chanting to the spirits. Camera and sound recorder were rolling and capturing it all but off-screen Peter was pulling all sorts of faces because of the pain in his toe. Just like watching someone who had just slipped on a banana peel our assistant David Muthondi began to giggle. He had an infectious sense of humor and it wasn’t long before Geoff, his ears covered by headphones, also began to stifle a chuckle. And then I started too. You know how it is. Suppressed laughter spreads like wildfire. Even Peter’s face turned red as his pain quickly gave way to snickering.

Headman Netshiavu and one of his aides beckoned to us to keep silent but it was hopeless. Soon we were gasping in a futile attempt to conceal our mirth. It was awful but we couldn’t help it. Then, suddenly, the old priest put down the calabash of beer he was holding and held up his hand signaling that the music should cease. He turned around to face us. He was well over thirty feet away from us. He certainly could not see through those glazed eyes and it was impossible for him to have heard our laughter. Yet, there he was, staring at us, his hands still held high as if to say, “Quiet!” But he said nothing. He merely glared at us for a second or two and then, in unison, both the camera and the tape recorder suddenly stopped working. They simply died as though someone had ripped them from their power sources. Instantly all laughter and merriment on our parts disappeared. What was going on? Geoff and I panicked. We furiously fiddled with cables and batteries and checked fuses, and then realized that everyone’s eyes were upon us. Could we have caused this? Mishack was summoned by the old priest who whispered something into his ear. Clearly perturbed, Mishack went over to Peter and quietly told him that our disrespectful behavior had angered the ancestors and the spirits of the lake. They were upset. We would not be permitted to continue filming the ceremony. On hearing this a cold shiver went rippling down my spine. Geoff’s face went white.

While Peter and David profusely apologized to Mishack for our misconduct, Geoff and I feverishly tried to trace the technical faults in the camera and the Nagra tape deck but there were none to be found. We changed batteries, cables, fuses, even film magazines and tape reels. But the equipment was as dead as a dodo. Amazingly, the voltage meter from Geoff’s tool kit showed that full power was coursing through the circuits of both machines. But they would not run. It was uncanny. We had never seen anything like it. Meanwhile, the old priest had turned his back on us and continued to chant and pour offerings into the lake. The headman, his aides, the musicians and everyone else connected with the ceremony concentrated their attention on the ritual and were now ignoring us. They proceeded as if we weren’t there. As Geoff and David fiddled with the equipment Peter and I huddled together and desperately tried to figure out what we should do. Peter called Mishack over again and requested that he please ask the old priest to hold up the proceedings and wait until we had rectified our technical problems. Not looking very hopeful, Mishack approached the priest, shouted something into his ear and the old man whispered something back to him. Mishack came back shaking his head, telling us that our gear was not broken but had been “blocked by the ancestors.” Nothing would work again until the entire ritual was over. The problem was simply that the spirits were not happy with our disrespectful behavior and would not allow us the privilege of recording any more of the sacred event.

I could not believe this was happening. All I knew is that we weren’t getting the sequence on film and I didn’t know what to do. As Peter and I were deeply upset we pleaded one more time with Mishack, begging him to ask the priest to offer our apologies to the spirits. Once again he ambled over to the old priest, waited for an appropriate moment and again conveyed our request. The old man turned to the lake and stared at it silently for a minute or so while everyone waited and watched. Mishack came back to us and shrugged.

“Who knows?” he said softly. “Perhaps the ancestors will be forgiving. Let’s wait and see.”

The old priest continued to silently gaze out over the lake, then slowly raised his withered and bony arms and chanted for a few seconds. Then he stopped, turned around, and stared at us. Without having realized it Geoff had left the Nagra tape recorder switch in the ‘on’ position because suddenly the machine started whirring again, the two tape spindles turning normally. Geoff caught his breath and looked up at me, wide-eyed. Instinctively I reached out and turned on the camera. Sure enough, it began running flawlessly as though nothing had ever happened. But Peter and I both knew that something profound had indeed occurred; something totally beyond our understanding. Peter was so taken aback by all this that for the following ten minutes he couldn’t perform on camera. However, by day’s end all was well. We had got what we came for, capturing the ceremony on film and on tape with no further technical hitches. What had happened? We will never know. It was eerie and totally beyond explanation. That night, back in Sibasa, Geoff and I meticulously went through the equipment again and found absolutely nothing out of place. Peter had experienced many strange things during his years of research among tribal people but this one eclipsed them all. It defied logic. In my own mind I have absolutely no doubt at all that powerful supernatural forces had been at work that day.