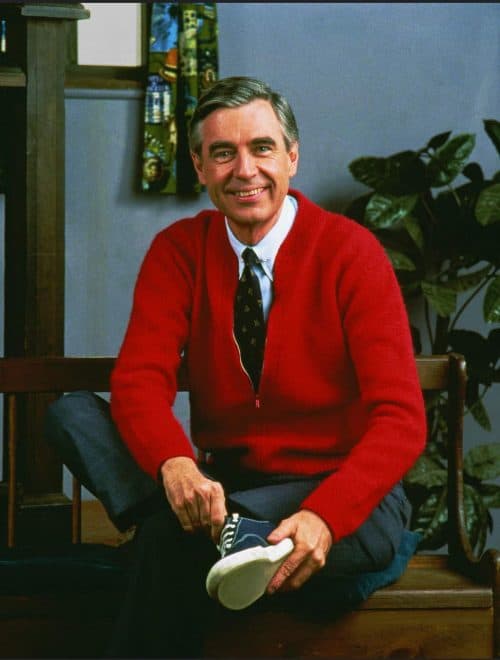 "Mister Rogers gives practical advice that both children and adults can use for dealing with sadness and anger, people who have wronged us and friendship."
photo by flickr.com

“A Beautiful Day in the Neighborhood” is the 2019 biographical drama film about a troubled journalist from Esquire who is assigned to profile television icon Fred Rogers (played by Tom Hanks). When the movie began, I told my wife that Mr. Rogers wore long-sleeved sweaters to cover tattoos he had up and down his arms. I explained that the tattoos were related to people he had killed while serving in the military; and he wore the long-sleeved sweaters so that other people would not have to think about his violent past. Well, it turns out that I was wrong. Fred Rogers has no tattoos, never served in the military and wore the sweaters because his mom made them for him. This urban legend, and my belief in it, really caught my attention because it demonstrated how easy it is for us to become cynical and question a person who acts from a state of kindness or genuine concern for humanity.

Apparently many people believe that Mister Rogers has tattoos and a violent past. It is often hard to accept that another person can be a decent human being who truly cares about doing the right thing, bringing goodwill to others and acting from a state of kindness. This theme is echoed in the film as it shows the cynical Esquire journalist, Lloyd Vogel, initially questioning Mister Rogers’ motives and intentions. Fred Rogers epitomized kindness to others. His television program, and this film based on it, was truly inspirational entertainment that showed humanity at its best. At the beginning of the film, Mister Rogers introduces viewers to his “new friend,” Lloyd Vogel, who is having a hard time forgiving someone and then asks viewers to think about forgiveness. Later in the film, Mister Rogers asks Lloyd to spend one minute thinking about the people who “loved him into being.” Imagine if we considered the love we have received from others that have brought us into being and then supported our growth and development throughout our life. How might that change the way we view others and receiving acts of kindness or love from others? Would that also change the way we give love or kindness to others?

It’s interesting to note that Fred Rogers had a difficult childhood and reasons to be cynical himself. As a child he was shy, introverted, overweight and suffered from asthma. He was bullied and taunted for his weight and called “Fat Freddy.” However, he went on to become an ordained minister and attended the University of Pittsburgh’s Graduate School of Child Development. Instead of becoming a pastor of a church or counselor for children, he created an inspirational television program to help children and families by focusing on children’s social and emotional needs. In the biographical drama, Fred gives practical advice that both children and adults can use for dealing with sadness and anger, people who have wronged us and friendship. The use of the word “Neighborhood” in his television program, “Mister Rogers’ Neighborhood,” implies that he viewed other people as neighbors or friends instead of as strangers. How would your life look or be different if you were more open to the kindness of strangers or possibility of making new friends with them?

“Simple kindness to one’s self and all that lives is the most powerful transformational force of all. It produces no backlash, has no downside, and never leads to loss or despair. It increases one’s true power without exacting any toll.”