The original version of this poem was created by the late poet Run Ru Ting (in Chinese, 丁润 如), whose English name was David Ting. He was the father-in-law of Tracy Tsou, who took the photograph with which it forms a complete visual-and-verbal artwork. She explained that her father-in-law was 80 years old when he moved from the bustling capital city of Taiwan and came to live with her and her husband in quiet Concord, Massachusetts. He had few other Chinese people to talk to; but he spent the last 16 years of his life studying classical Chinese texts and writing. This poem was composed soon after he arrived in the US and was prompted by the photograph Tracey took one evening when a deer appeared outside her kitchen window.

Tracy teaches my middle-school son Chinese. This past February she kindly responded to my request for native speakers to help me translate poems from other languages.

Not long after Tracy and I met to talk about the poem, the worldwide lockdowns prompted by the COVID 19 pandemic began. I found myself thinking a lot more about isolation and connection, humanity and nature. My English version is not a strict translation, but I hope it is a rendition for our times of the poet’s idea. 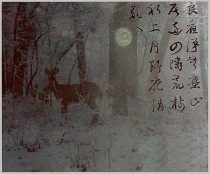 And meets my eyes