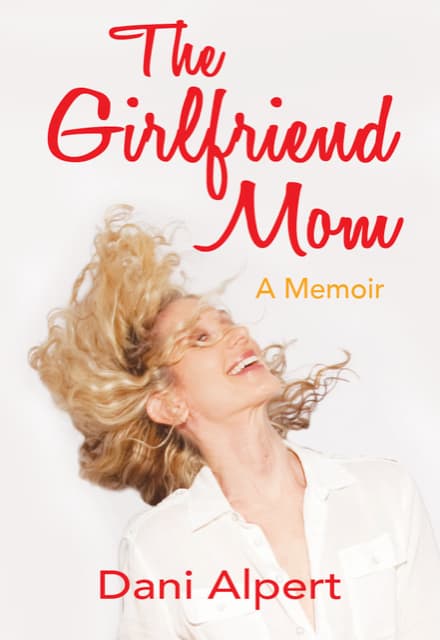 Please enjoy this excerpt from “The Girlfriend” by Dani Alpert.

There are 2 ways to enter to win your choice of a FREE paperback copy or eBook:

Winner will be randomly selected on 6/1/20 and announced on our website and social media. *

~~~~~~~~~~~~~~~~~~~~~~~~~~~~~
After tap-dancing through life as a child-free woman, Dani Alpert fell in love with Julian – divorced dad of Nicole and Tyler – and stepped into the amorphous role of a parent’s live-in significant other – or babysitter without compensation. Presented with a Whitman’s Sampler of motherhood, she made some rookie mistakes, like leaving the 11-year-old alone in the house while running to CVS for raisins and donating to the Alzheimer’s Foundation as the kids’ Christmas gifts. Seven years in, Dani got her bearings and sunk deeper into her semi-parenting role, surprising herself and those around her, and anointing herself “the Girlfriend Mom.” And then she was dumped for a natural blonde. It wasn’t a traditional divorce, and Dani had no visitation rights – but she and the kids wouldn’t break up – and Dani went from keeping a guardedly warm distance to fighting for a place in their lives.

Marie grabbed a bottle of wine from the refrigerator. “Would you like a glass? I’m meeting my boyfriend in about an hour, but come upstairs while I get ready.”

I didn’t necessarily want to watch her primp and groom, and at the same time, it was all I wanted to do. I followed her upstairs.

If the inside of Marie’s house had been shrouded in mystery before, standing in her bedroom was truly pulling back the curtain. Clothes were strewn everywhere: on chairs, over mirrors, on the floor. My God, that’s a big bed. I was tempted to make it my personal trampoline and then burrow under the blankets and hide, but it was probably too early in our relationship.

Instead, I took a seat on the edge of her bathtub. Products were piled on countertops and spilling out of medicine cabinets. How much witch hazel does one person need? It looked like she’d raided Costco while getting ready for the end of days. I’m probably using the same lip gloss from college.

We discussed the pros and cons of Botox and her cat’s neurological disorder through our  reflections in the mirror like I used to do with my mom when I was little. I wasn’t ever interested in how my mom applied eye shadow or straightened her hair; I just didn’t want to be downstairs with my brother while he was running amok with underwear on his head, trying to shock the babysitter.

I sipped my wine and chuckled to myself at the absurdity of the scene. Marie picked up the hair dryer and, before turning it on, admitted that in the past, she had been jealous of me. What? She told me about a time when she’d found out that I had driven Nicole and Tyler somewhere and how much it had upset her.

Marie shouted over the whirring of the dryer. “It was silly, but I didn’t know you, and I wasn’t told or consulted.”

I shouted back, “No, you were right. You should’ve been told and consulted.”

“Early on, Nicole came home from being with you and Julian and adamantly told me something you’d said. I don’t know what it was, but I remember telling her, “Dani doesn’t know everything.”

“You were wrong. I didn’t know anything.”

We laughed. I didn’t question the authenticity of her feelings; instead, I gave over to them.

Marie had no magical powers. She was just a woman – like me. Going to the bathroom, so to speak, with Marie was the icebreaker and the true start of our friendship. Shortly afterward she texted me about celebrating Tyler’s eighteenth birthday.

Marie: Do you want to have dinner with us Friday for Tyler’s Birthday?

Me: Oh, that is so sweet. I would love to but do you think he’ll be okay with it?

After almost nine years, my insecurities were alive and kicking. Before she responded, I stopped thinking and quickly sent a follow-up text.

Me: Yes! I’m in. Let’s do this. I’ll save postage on mailing Tyler’s gift. Looking forward to catching up with you as well. Xo

Marie: Yes, he would love you to come. I’m surprised she didn’t add “you idiot.”

Birthday night, Marie motioned for me to sit between Nicole and Tyler at the table while she sat directly across from me so that we were flanked on one side by Nicole and Joe and on the other by Tyler and his new girlfriend, Olivia. Girlfriend? Already? We looked like any ordinary couple out for a special steak dinner with our kids.

At the end of the meal, a restaurant photographer approached the table, asking if we wanted our picture taken. It was like when you’re on some adventure ride – say, a white-water rafting trip and for a cool four hundred dollars you can capture the exact moment when you are leaning out of the raft, mid-scream, hurtling toward potential death.

Marie ordered three copies, even though nobody but me was interested. It was also at dinner that Marie casually told me that earlier in the day she’d referred to me as Nicole and Tyler’s stepmom to a co-worker. I smiled, but inside I was thinking, Am I hearing things? Is she trying to give me a stroke? I greatly appreciated the sentiment, but I was surprised there was still an aftertaste – like the cottage cheese.

We said our goodbyes outside in the parking lot, and I told Tyler that I’d see him at his high-school graduation before we drove off in different directions. I received a text from Marie the following morning.

Marie: Dani, I am so glad you came. It was so much fun listening to the stories. I am very happy we got to do that together with the kids. They are very lucky you are in their life! Thank you again for coming. XOXO

I had every intention of attending Tyler’s high-school graduation the following spring, but after much deliberation and hand-wringing, I couldn’t do it and I backed out. Me: Hey, I wanted to let you know that as much as I want to and I really want to – I won’t be able to make your actual graduation ceremony next week. However, your mom and I are trying to find a time for all of us to get together to celebrate – probably won’t be easy seeing as your calendar is probably super full, you being so popular and all! I bet you’re excited and probably a bit sad about graduating. I love you, and we’ll talk soon. Xo

Tyler: Its ok i understand yeah we will do something another time. honestly i cant wait for the school to be over but i dont really wanna leave yet so im kinda upset. Thank you dani love you

Funny how years earlier I’d practically given myself an ulcer avoiding Marie at Nicole’s graduation, and now it was Julian who I was dodging. I allowed my hurt and anger to get in my way and denied myself the opportunity to be a part of Tyler’s graduation. And for that, I am genuinely sorry.

After months of listening to Marie and sharing our stories and experiences with our common ex, I eventually stopped making excuses for him. For the first time, and with Marie’s help, I saw him and our relationship through a more transparent, less emotionally wrought lens. He had been the man that he had always shown himself to be, and had I looked I might have seen it.

Boy, that Chaucer really knew what he was talking about when he wrote, “For Love is blind alday and may nat see.”