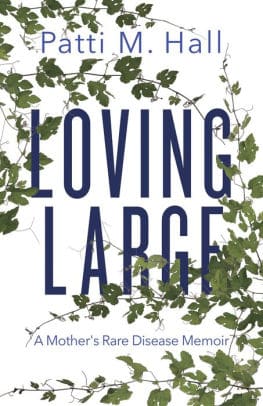 There are 2 ways to enter to win your choice of a FREE signed hard copy or eBook:

Winner will be randomly selected on 5/18/20 and announced on our website and social media. *

If not me, then who will save my child?

A mother must confront the unthinkable when her son is diagnosed with a rare medical condition.

In 2009, Patti’s life was pitched into an abyss of uncertainty when her 16-year-old son Aaron was diagnosed with gigantism, a disease of both legend and stigma, after doctors discovered golf ball-sized tumor on his pituitary gland. When this grenade went off in Patti’s life – an uber-rare disease that most people, including Patti, thought was a figment of folklore – all of her previously relied upon tools for crisis response were useless.

After scrambling to access a handful of medical experts in the field, Patti learns that her son could grow uncontrollably, his mobility could be permanently limited and his life could be cut short without timely and aggressive treatment. Already juggling the essential responsibilities of being a mother to two teen boys, the weight of her son’s rare-disease medical needs and gravity of his prognosis got so heavy that Patti cracked open.

In the “after diagnosis” period of their lives, as her son’s advocate, cheerleader, first responder and more, Patti got her son what he needed but nearly destroyed herself. Cleaved like the continental divide, she left who she’d been before irretrievably behind. Like many parents of chronically and critically ill children, Patti patrolled the perimeter of her child’s life while her marriage and closest relationships imploded, her career was paralyzed and self-care disappeared altogether with her identity in tow. Patti struggled and failed to rebuild her life as a newly divorced woman.

In Loving Large, Patti’s voice exudes wit, wisdom and humor as she discovers that resilience is learned and that the changes experienced in the aftermath of crisis can often create the greatest opportunities. Every mother and father of a child touched by a rare, chronic or incurable disease might have a unique tale of the diagnostic and treatment odyssey. Still, the commonalities of Patti and the experiences of many other parents’ heartaches and despair make this everyone’s story.

We think we comprehend the boundaries when we opt into parenthood. (We think we know a lot of things when we have our babies.) I believed I was a competent mother by the time my kids were in their teens and I ended up emotionally crippled by our experience. I was pulled into unknown waters by duty, loyalty, and love, sure, but primarily by necessity because I couldn’t find an answer to the one question that drove me to wade in deeper: if not me, then who will save my child? I’d volunteered for this gig, after all. This was my job. This is what parents sign on for in the ‘for better or for worse’ scenario called life with kids. But I was so far out of my depth that I wondered how I would survive, and if I would be cast adrift.

I was a boiling cauldron that day, grateful to the unknowing passersby who gave me fodder for resentment, seething as I was. I feel a little ashamed now of how I was hating on every person whose life was still going on unabated, untouched by the horror my son was enduring as instruments bored into his head, but it made the time easier to bide. Like I said, I’m ashamed now. I walked by self-absorbed students by the dozens with phones in one hand and Starbucks lattes in the other. People just kept on walking hurriedly to the places they told themselves mattered. I was a curled lip, snarling dog, looking at them in their busyness. Hurling whispered obscenities under my breath. I wanted the world to stop turning, to halt mid-stride and hold its collective breath until my son came out alive. My boy was on a surgeon’s table, and why did the world not get that?

You can purchase Patti’s book at Barnes & Noble or Amazon.