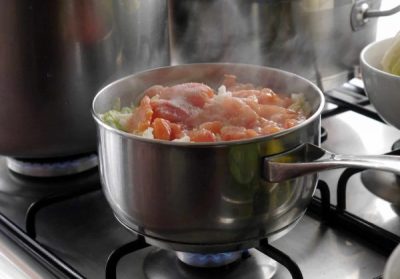 That morning I made Siege Soup. It was not at all what I had planned. I made it out of what was in the house. But it was more delicious than anything I could have found in a recipe.

This is how I made Siege Soup:

I put the remainder of the olive oil I’d bought at the Arab grocery store into my pot. I added a splash of the olive oil I bought at the department store because it called itself “pepper” oil and swore on the bottle that it was spicy, but it totally was not. It turned out to be a bland tomatoey situation designed for delicate German taste-buds.

Everything almost came to a grinding halt right there. I had no onions! No garlic! No carrots! I wasn’t allowed to make soup! Also, I assumed it couldn’t taste good without them. But mostly, wouldn’t the collective shade of everyone’s grandmothers rise up and condemn me for crimes against soup-making? I stared nervously into the pot, paralyzed with guilt for even considering such sacrilege.

And then the collective shade of everybody’s grandmothers did rise up! I was surrounded by centuries’ worth of peasant grandmothers, just kinda looking at me like, “Get that pretentious Ruth Reichl shit out of your head, woman, and welcome to the club! This is cooking. Do you think we had all the ingredients? We almost never had all the ingredients. For the majority of human history, this was the norm. Plague, war, famine, pestilence, poverty, storms, failed crops, depressions, genocide and most definitely not having onions to put in your soup. We made do with what we had. That’s where that expression came from. We were far more used to having to get by without stuff than we were to having it! Yours has been an unprecedented time of peace and unparalleled prosperity for the fortunate few that 99% of us from the past can’t begin to dream of. Make the soup with what you have and welcome to life on Earth.”

So instead of a mirepoix (mixture of chopped onions, carrots and celery) I shamelessly sautéed the remainder of a bunch of celery – without its friends.

I put in two bay leaves from my friend who moved to Russia. I thought that the gift was so typically her: simultaneously practical and artistic, down-to-earth and elegant.

Three sprigs of rosemary went in because they were in the fridge.

Then salt – some of the last from the box I bought when I moved into this beautiful flat.

I added two handfuls of (chopped) baby potatoes that I bought when laying in provisions for the Long Siege. This is what the Germans call “hamster-buying.” I was never really a fan of potatoes until I left their native New World and moved to this country that had so enthusiastically adopted them. But as I put the potatoes into the pot, I understood why they were so beloved by German peasant housewives. They’re cheap, they’re hardy, they last a long time, you don’t have to refrigerate them, they’re nutritious and you can sneak them into a lot of stuff.

I realized I should have browned the chicken first. But then I thought of my Hungarian-Israeli mother-out-law who never browned the chicken. She just tossed it into the pot whole and didn’t fuss about the horrifying specter of being held responsible later for pale flabby chicken skin. Because it was good enough! If she could do it, so could I.

I semi-browned the 2 chicken quarters although the other stuff was still in the pot. I felt exultantly slap-dash and devil-may-care, cocking a snook at proper cooking technique.

As I scraped the browning stuff off the bottom of the pot, I thought of my mother-in-law, who had made the exact opposite life-choices as I had at nearly every turn, and who consequently had nearly an exactly opposite life.

I thought of her as a little brown-haired bumpy-nosed Hungarian girl living in a German-speaking neighborhood in a country that didn’t exist yet in the Middle East, then as a teenager going to the beach with her boyfriend and an Uzi, then marrying that boyfriend, moving to Germany with their kid, moving to the United States and having another kid. Somewhere along the line becoming a blonde with a button nose, devoting her entire life to housework and emotional labor and nurturing, now a grandmother. She probably had sex with very few men other than her husband, potentially not even any other men…and they had been married a long time.

I thought of her love of beauty, her spriteliness and of all the things I didn’t like about her. I scraped the bottom of the pot and thought about how she lavished every form of love on my son that anyone could lavish on anyone, and how glad I was that she could be there for him sometimes when I wasn’t.

Next, a can of diced tomatoes that was originally intended for Jollof pilaf and plantains (as was the chicken) went into the pot. This was a nod to the African woman who sells the pilaf at the Turkish market by my house – always in her bright batiks and turban, greeting customers with a soft “hallochen” (hello), making me proud to be an immigrant woman just like her.

I picked up a bottle of wine that was on the table. Soup with tomato in it is better with a splash of wine. I paused, again paralyzed with guilt. This should have been a splash of Chianti, Bordeaux or Cabernet Sauvignon. What I had in my hand was a dainty, flowery, aromatic Côtes de Gascogne that spoke of grapefruit-avocado salads on white verandas in June.

I checked in with the Shades of Grandmothers Past. They all just nodded their heads.

To compensate for the wine’s delicacy, I put in three times as much as I should have done. “Eeek! That’s too much!” I chastised myself. “Too much…or just right?” I cackled. I liked this new me!

Soups with tomato in them need a spoonful of tomato paste and a pinch of sugar to intensify the tomato. Of course, I didn’t have these things. But my eyes slid to a likely bottle on top of the fridge that would be a great understudy. “Oh, gasp, not that!” I breathed, pale at my own audacity. “That would be just…too ghetto!” I pleaded with myself to respect the rules of cooking. I ignored myself and threw a hearty slug of German ketchup into the soup.

The Grandmothers Past looked down at me. They had known this in their bones for so many centuries that it would never have occurred to them to spell it out. This funny modern generation, so advanced in some ways, and yet…like babies in other ways.

I let the soup boil for a couple of hours.

During that time, I reflected that if I had lived at any point before quite recently, I would already be a grandmother myself. That is if I were still alive and hadn’t been killed by my fifteenth pregnancy, by illness, by disastrous medical “care,” by hardship or by exhaustion. And if I were still alive, I would look nothing like I do today. I would look damned old. Like a grandmother. Because of my ninety-seven children and the drudgery of hauling water, or scranleting fields, or all the other toil that used to be an irrevocable part of everyday life. But on the other hand, I would have quite different values and I wouldn’t have some of the stresses that the iAge has brought upon us. I would be more connected to the land, better supported by my community and I would have a different relationship with seasons, cycles, nature, what constitutes a good time, what constitutes goals and what constitutes happiness.

I looked at the soup boiling and decided that instead of judging the Grandmothers Past, maybe I needed to accept that they and I may have had equally wonderful lives, albeit in different and non-comparable ways.

Let it sit. I went for a long walk in the park. It was wet and bitingly cold and the wind was howling and then it hailed. I thought of my warm snug flat and felt rich.

Reheat. Sprinkle with chives because although they don’t quite go, they needed to be used.

Serve with an inappropriately dainty white wine because that’s what we’ve got, and chewy crusty hearty German sourdough-whole-wheat bread just bought from the bakery this morning. This is my one big dangerous thing these days – the only kind of shopping, the only kind of going out other than my walk, the only kind of in-person human contact. Once a week I go to the bakery and buy a loaf of bread and a croissant. I eat the croissant for breakfast by the Kanal and give the swans a bit of my bread. Every week that they are still open and I see the sign out, people patiently queuing down the sidewalk 6 feet apart, I get a bigger thrill. (Especially now that flour is usually not available.) Every week that they actually still have bread, I get literal shivers of excitement. When I march out of the bakery clutching my bag of warm, freshly-baked bread (in gloved hands, of course) I can’t hide my huge grin.

I hope I keep feeling this rich after the Plague goes away!