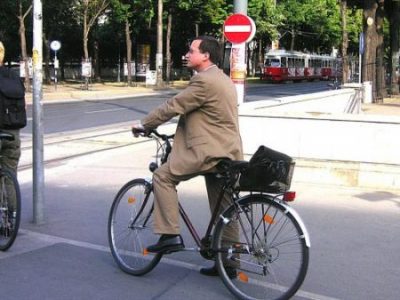 "Using a bike is a great way to improve your physical health."
photo by commons.wikimedia.org

We all know that biking is more environmentally friendly than driving; however, there are many more reasons to consider if you’re thinking of switching your daily transportation from driving to biking. (You may also want to try and convince a colleague to do the same.)

Here are some reasons to leave the car at home and start biking everywhere in your daily life:

It’s much cheaper to buy a bicycle than a car. A great bike can be purchased for just the price of a monthly car payment, and it will last longer than your car. Accessories including rain gear, lights for night biking and more are also reasonable.

The bicycle has a much smaller footprint than the car, especially when considering manufacturing and its associated environmental impact. Bikes can be produced with much fewer materials, less energy and shipping costs. They don’t release toxic fumes into the environment. They do not drip oil, fuel and hydraulic fluids on the roadway; so there’s less toxic runoff into the waterways. Overall they are much less damaging to the environment.

Bicycles create a lot less road wear, lessening the burden on taxpayers to repair the highways. A bicycle weighs about 20 pounds vs. a regular car weighing a couple of tons. This results in less potholes and resurfacing projects being needed.

4. Can be used as a second vehicle

You might not be able to use a bicycle as your first mode of transportation, but it may work as an alternative to a second car. If you use a bicycle for commuting and errands on the weekends, you can save thousands of dollars instead of getting and maintaining a second vehicle.

Using a bike is a great way to improve your physical health and lose weight. We all know the health benefits of regular aerobic exercise. You can burn up to 600 calories per hour while cycling briskly. Many people who have switched to commuting by bicycle have lost 15 to 20 pounds in the first year without making any changes in their diet or eating habits.

Bicycles take up a lot less space because many can fit it the space of a single car. Parking lots are a blight on cities and have a major environmental and financial impact on municipalities. If more people use bikes, fewer parking lots need to be built.

Bicycling may actually be quicker and more efficient than a car, especially in a major city that experiences a lot of rush hour traffic. When a city has designed segregated bike lanes, bicycle commuters can just zoom past rows upon rows of cars stuck in a gridlock.

The maintenance costs of bikes are much lower than cars. Bikes require service, it’s true, but you can do many things yourself. Even if you need to take your bike to a shop for repairs, it costs a lot less to replace a part, both for the cost of the part itself and the labor.

Bikes are a great option for everyone to become mobile, especially those who can’t drive or afford a car. While the cost of purchasing, maintaining and insuring the car is too much for many people, a bike is much more accessible. It’s the most cost-effective transportation anywhere in the world, after walking of course.

For all of these reasons bicycling is a great alternative to driving in your daily life. You may want to look into making the switch now.