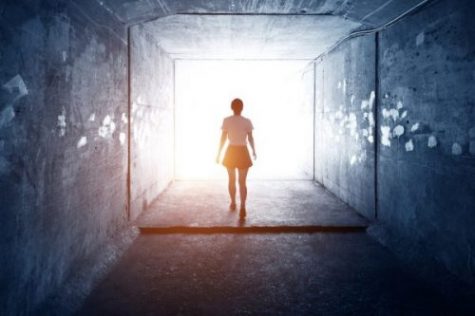 "No matter how hard we try to be good people, to do the right thing, none of us can escape the trap of having to make impossible choices."
photo by www.istockphoto.com

“The truth is . . . we are the others. Most of us are one paycheck, one divorce, one drug-addicted kid, one mental health illness, one sexual assault, one drinking binge, one night of unprotected sex, or one affair away from being ‘those people’ – the ones we don’t trust, the ones we pity, the ones we don’t let our kids play with, the ones bad things happen to, the ones we don’t want living next door.” ―Brené Brown, “I Thought It Was Just Me (But It Isn’t)”

Life does what life does, with all its twists and turns on a road that no one can predict. Life is not black or white. No matter how hard we try to be good people, to do the right thing, none of us can escape the trap of having to make impossible choices, the kind that break our hearts, sometimes forever.

But honestly, I never thought I’d be “one of those” people – a woman who gets an abortion. By age nineteen, I’d gotten pregnant despite being on birth control. I was only halfway through my first semester of college and had grand plans of becoming a war-time correspondent. But now, here I was pregnant. So, the father and I tried to do the right thing: I was three months along when we had our shotgun wedding.

Did you know that one in three women in America will have an abortion in her lifetime? Don’t forget: that means one in three men, too, as obviously women aren’t asexual amoebas. We don’t do this on our own. I doubt if any woman dreams that someday she’ll get an abortion. Just like I doubt that anyone of us dreams of going bankrupt, getting fired, divorced, inheriting a mental illness, or killing another human being on the battlefield or self-defense.

Five months after our first daughter was born, I unexpectedly got pregnant again. Another girl. Except it was clear by now, he and I were not meant to stay together. Back then, he hadn’t been a family kind of guy; he desired fun, not fidelity. Across the horizon, divorce was coming for us like a brewing prairie storm.

The Moments We Never Want to Face
Months after our second child was born, I started to feel sick again in the mornings. How can this be? I’m on a different birth control now. This can’t be happening. I knew that soon I’d be a single, low-income mother, really too young to be a parent in the first place. I had no parents of my own to turn to for love and support, or even a sack of groceries now and then. I’d be on my own, baby, all on my own.

I drove to the drugstore that morning, hoping that an in-home pregnancy test would prove me wrong. I remember mixing the solution and placing the evidence on the kitchen counter. Between changing diapers, feeding my kids lunch, and filling the dishwasher (and lots of pacing), I must have looked at that tube a hundred times. Finally, after the required two-hour wait, I stood there holding my breath, hoping for clear sailing. But through the test tube, a ring-shaped dark shadow appeared, reflected in a mirror of the kit. I squinted harder, hoping that because of my poor eyesight, this was only a mirage. Except as the minutes passed, the ring was unmistakably – positive.

That afternoon, my soon-to-be ex came home from work, plopped on the couch and went about his usual routine. I stood in the hallway and watched him rummage through his pockets for a joint. I felt myself floating outside my body, outside my own life. Our two baby girls titled their heads back, mouths open, in awe of the smoke that encircled their father’s wavy, dark-blonde hair. He took another puff and coughed like a cat hacking up a furball. There’s no way I can have another child. The girls and I will barely make it as it is. Dear God, I’m so afraid.

Finally, he looked up at me, his eyes glassy and red. I blurted out the truth. He threw his long hair back and shook his head. “Jesus Christ, what are ya gonna to do with another kid?”

I assured him that our story hadn’t changed. We’d still get divorced. And, I would find a doctor to fix things. He took another drag and nodded, “Okay.”

When I called my ob-gyn, the nurse was perky, her voice lilting, “Well, we better make an appointment and get you on some vitamins right away!”

I clutched the phone tighter, hands sweating, heart pounding. “I don’t want to have the baby,” I croaked, shame creeping through me.

“Oh,” she replied, her tone turning dark. “We don’t do that here.” She told me where I could go.

The Moments We All Face Alone
That day I went to the clinic alone. The waiting room was filled with women holding their large, swelling bellies. Not everyone was here for an abortion, obviously, and I thought several times about running out the door.

The nurse finally called my name, and led me to a small, white room where I was told to undress, and wrap my cold body in a scratchy, paper gown. There was a window straight across from me, and on the other side of it was a granddaddy oak tree. Another Nebraska autumn was coming our way, the air crisp, thick, and gray.

No one told me what to expect until it was too late. I didn’t realize that I’d actually go into labor during the procedure. It was fast, painful, surreal. My eyes, mind, and soul locked on that magnificent tree.

When it was over, both the doctor and nurse left me alone for a while. What would’ve been my third child was now gone. I kept staring at the old, oak tree – the only witness to my searing grief – when a sudden gust of wind shook countless leaves in vivid yellow and orange and russet-red from its massive limbs. I watched the leaves drift and drop to the cold, dry ground. And then, I began to weep – for my unborn child – and for us. I both regret, and do not regret, that I made the best, impossible, heartbreaking choice at that time in my life.

When I was a religion reporter, I remember a former Catholic priest speaking to women who had gone through abortions. He told them they should forgive themselves and be kinder and more self-compassionate. They had faced unbearable circumstances and were forced to make heartrending, nobody-wins choices. Maybe they were too poor to raise the child, too young, or too afraid. As the Native American proverb goes, “Never criticize a man (woman) until you’ve walked a mile in his (her) moccasins.” He believed that the fetus, the unborn child, was waiting for them on the other side of a beautiful river, after death. Never waiting to judge or condemn you, he assured them, only waiting to welcome and hold you once again.

Aren’t we all in this journey called Life – together?