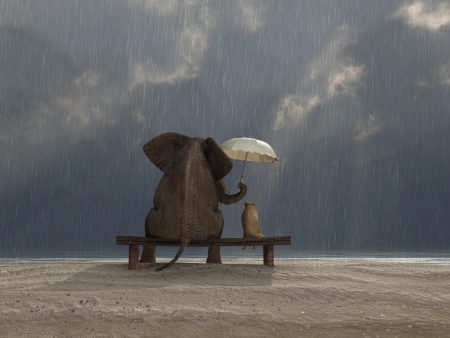 "Being kind and empathetic is GOOD for Business and all ways of Life."
photo by Mike Kiev, iStockphoto.com

I paced around the movie-star beach house, expecting Robert Downey Jr. or Scarlett Johansson to come running down the hall any moment. Actually, I wasn’t pacing—it was more like I was doing the “Quasimodo stroll.” You see, my left leg and hip had been seizing up for weeks, and the doctors didn’t know why.

As a ghostwriter and book editor, I work virtually with my author clients—via Skype, email, and phone. But this particular client had just flown in from New York to “hang” at a friend’s place near Malibu—and kept insisting that I meet her there, that morning.

Problems: My hip and leg were hurting like hell . . . I didn’t have a car that day and would need to Uber out there (about 25 miles away) . . .  and the book proposal we’d been working on was going great, so there was no reason to meet her that day. But she wanted what she wanted. When I tried to reason with her why it didn’t work that day, she rolled right over me—like an army tank in Gucci heels.

About an hour and $50 later, I arrived. Thankfully, the Uber guy had taken me right to her door. The beach house sat at the bottom of a long, steep driveway (think San Francisco steep). But the place was breathtaking. And, as I glanced back up at that long, steep hill, I thought: Whoa. At least, I didn’t have to hike my way down here! That would’ve been tough on my hip and leg.

She asked if I wanted to sit inside or out. I preferred inside, I told her, at the table near floor-to-ceiling windows with a spectacular oceanside view (I hadn’t dressed to sit outside).

Instead, we sat on the deck in lounge chairs so she could get some sun. The rays sparkled on the waves that lapped up the sand. It was beautiful. But there was zero shade. She wore skimpy white shorts, and her younger, bare legs basked in the full sun, while mine were sweating under black leggings. Meanwhile, I kept trying to shield my middle-aged face from cracking like the top of a damn crème brûlée (ha).

In a No-Boundary Dead Zone
At one point, our meeting took an awkward turn.

Apparently, she had a secret agenda: When she hired me, she’d assumed I was a close friend of a certain famous author, and that I’d simply ask this person to write the foreword to her book. (I realized only later that the person who referred her to me was a friend of a friend, who actually did know the famous author). But I wasn’t close to this celebrity at all, and we’d only meant once. That was it. I explained this gently to my client. A few minutes later, the meeting was over—and it was time for me to get a ride home.

Back inside, a 20-something woman entered the same room, plopped on the couch, and opened her laptop. She never said a word or acknowledged me, and my client didn’t introduce us. Her personal assistant? I wondered.

Hmmm. I tried using my cell, but I was in a dead zone. I start sweating, wondering how I’d get home. I put the phone down for a minute. Picked it up again, and kept trying, praying that my GPS would lock onto an UberX driver, the bottom-rung price. Nope, none available. Not one flashing dot on the screen. Crap.

I meekly called out my client’s name who’d gone down the hall to change. She emerged wearing a silk Japanese kimono, her hair in the neatest blonde bun I’ve ever seen.

She then flatly informed me, “Good luck getting an Uber out here, on the way back—it’s tough.” OK, earlier, she’d convinced me on the phone (uh, demanded) to take an Uber out to her because it was only a quick 20 minutes away. She never mentioned: hey, good luck finding a ride back.

A Grace Kelly look-alike, she turned on her heels, and waltzed over, grabbing the phone from my hands. “Well, dahhling, let’s see if there’s a Black.” I had just started “Ubering,” and back then,  didn’t know that “Black” meant a fancier, more expensive ride.

“Ohhhh, look at that!” she exclaimed like she’d solved all my problems. “Black car, 6 minutes.”

She plopped my cell on the counter, and my eyes almost popped out of their sockets: The price staring back at me was $120 to $170. One-way. She had to see that, right? I mean it’s in 82-point type across my screen, for God’s sake. She turned and walked away as though it meant nothing—that I’d have to fork out more than $200 roundtrip for an in-person meeting that wasn’t necessary in the first place.

My mind volleyed back and forth. Maybe I should pay it . . . act like it’s no big deal. Maybe this is just the price of doing business. I mean, she acts like it’s nothing. So maybe I should, too.

Truth is: I didn’t want to look poor, cheap, or less-than. In the end, however, my gut knew better. That’s too much for me, at least right now. So, I picked up my cell again, said a silent prayer, and bling! Rick in his Nissan Altima was 3 minutes away. And he was UberX. I told him that I’d meet him on the highway at the top of the hill. So, like a Tibetan Sherpa, I slung my laptop, purse, and a heavy bag of notes and research, across each of my shoulders—and headed out—dragging my left leg behind me.

My Knight in Dusty-Black Armor
Shit. I didn’t realize how steep and windy this hill is. It was much easier in a car on the way down. But I couldn’t miss UberX Rick! This was my only chance. On the way up, as I clung to the edge of the path, grabbing at bushes here and there to keep from falling, pain shooting through my hip and leg, I crossed paths with a young guy on his way down. “This hill’s a real bitch, huh?” he laughed, huffing and puffing.

“Yeah,” I laughed, too, doing my best to conceal my own huffs and puffs. Finally, I caught a glimpse of UberX Rick at the top. My knight in dusty-black armor! I ran-limped the last hundred feet.

He shook his head and smiled. “You know, I could’ve come down there and got you!”

In business, especially when you’re an independent, self-employed, a solo operation—it can get tricky juggling deadlines, workflow, cashflow. And there’s also the balancing act between knowing when to go the extra distance to keep your clients happy—and when to draw your own, self-respecting boundaries. (In hindsight, I should’ve seen this one coming. During our first phone call, she’d badmouthed two other writers that she’d hired before me—a big red flag).

It’s always a gamble; yet, I’ve been pretty lucky over the years. But sometimes, I’ve had to deal with disrespectful, difficult clients, and eventually, we both lose. Why? Because they just haven’t figured out yet—that being kind and empathetic—is GOOD for Business—and all ways of Life.