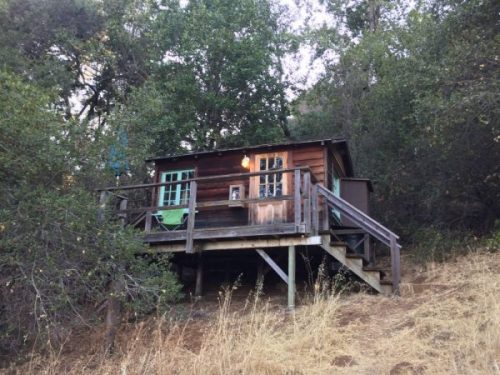 "I am writing this month’s guest post from Josephine’s Cabin, a tiny one-room retreat house I come to four times a year in order to get off the grid and into my own heart."
photo by Sherry Richert Belul

Part two of an unexpected series…

Author’s note: I am writing this month’s guest post from Josephine’s Cabin, a tiny one-room retreat house I come to four times a year in order to get off the grid and into my own heart. In the past year I have written several guest posts for KOM about personal retreats because they are so powerful. On my agenda for this retreat was to write my KOM article for this month. I didn’t know what I wanted to write about, but then something happened.

I was washing the dishes in the cabin and when I turned around, I noticed that the pink paper parasol I’d left on the little desk behind me the last time I was here was still there. It was perched jauntily in the arms of the driver balanced on a cart, holding the reins to two horses.

It made me smile that the parasol was still there. I remember leaving it, wondering if anyone would notice it and if so, if it would make them happy. I had hoped so. Now, here I was enjoying it! It was so sweet to me that it was still there.

Then I glanced to the side of the horses and I saw that a notecard was leaning against them. It had a heart in a basket. It read: “May your stay here bring you any peace, love, joy, magic or healing that you desire. You are loved.” And someone had drawn a little heart. 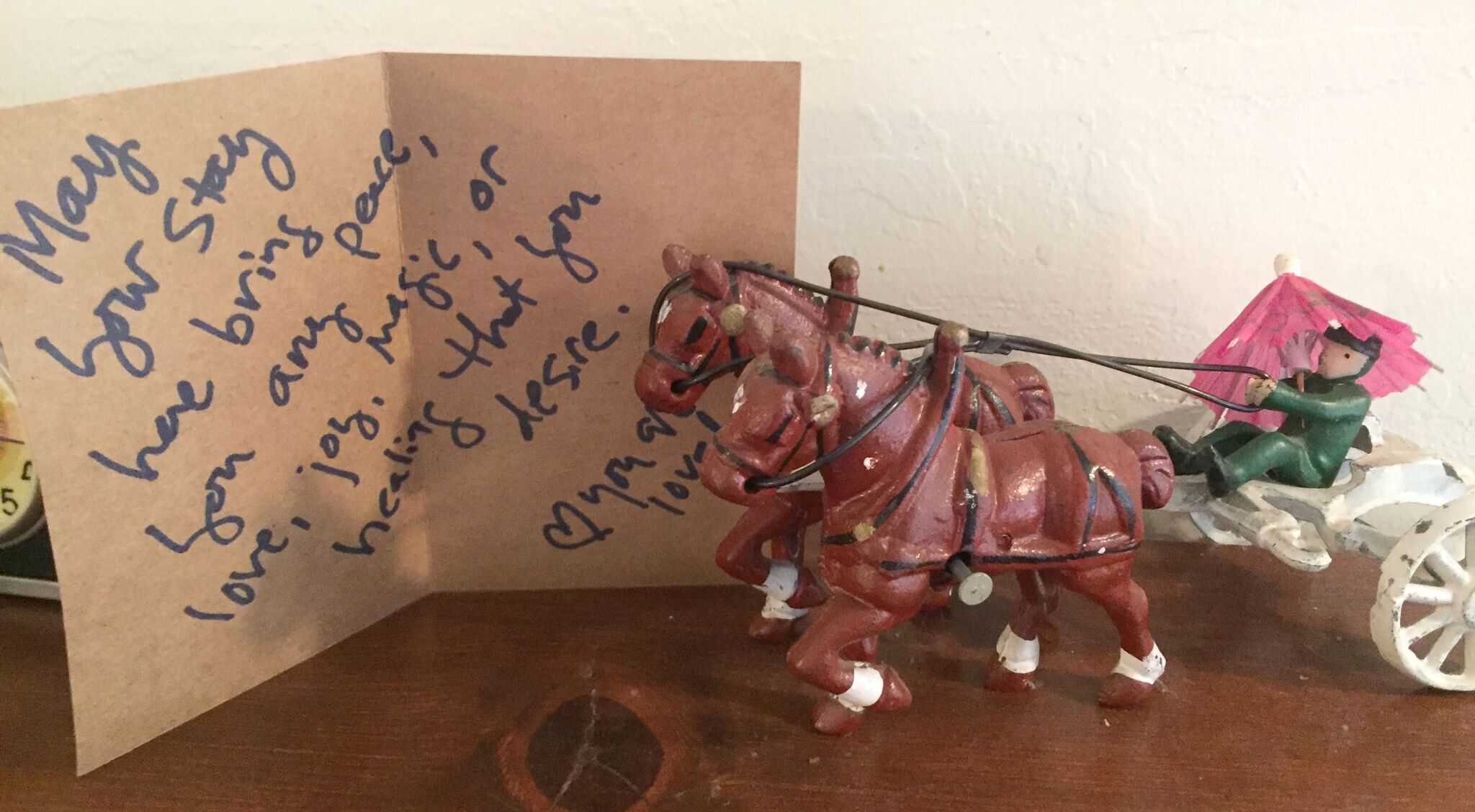 I knew that notecard! It was the card I had written and hidden on top of the pillow, underneath the bedspread, the last time I was here. I had left the card as an anonymous greeting to whomever stayed in the cabin next. Now, here it was, keeping those horses, the driver and my parasol company on the old-fashioned roll-top desk!

When I read the card, even though I had written it, I felt awash with love. It truly felt like a gift to me – like someone was wishing me a beautiful stay. I’d left those things to surprise someone else, whomever happened to stay here next. But in seeing and reading them, they were gifts for me! I realized that unknowingly, I had been writing to my future self! I had left that perky parasol for my future me. I had left a card for an older me to find!

You might remember that in last month’s Kind Over Matter post I wrote about how the lines of giving and receiving almost always get blurred. Isn’t it funny that when I arrived at this cabin, unsure of what to write about, the cabin gave me an experience of exactly what I wrote about last month?

The thing is, we just don’t know. When we give a gift we never know the impact it will have on the person we gave it to, ourselves or anyone else in the world.

Just writing that sentence reminds me of this beautiful cake tin that my friend Kirsten owns. Once she and I were taking the ferry to visit a mutual friend and Kirsten brought a lemon cake in that tin. I was enchanted! The tin is colorful and very old-fashioned. Just seeing her carry it was a gift in itself. I asked her to tell me the story of it and she said it was a gift from her cousin.

Little did her cousin know when she bought that cake tin that it would bring some stranger such joy on a Sunday in January on the way to Alameda. Being someone who loves this sort of odd appreciation, I wrote that cousin a letter to thank her. You see how the giving and receiving circles round and round?

Here’s another revolving door of giving/receiving that just happened:
It is now morning at Josephine’s cabin, the day after I started writing to you. I’ve done my meditation and the rain has been pouring down outside. It is peaceful, calm and cheerful here. I make my coffee in the French press and happen to glance up on the shelves where the tea and sugar canisters are kept. I do a double take.

There, nestled at the bottom of the sugar canister, filled with tiny packets of sweetener and brown sugar, is a blue “Be You” button. I’d left that button many visits ago for a stranger to find! Has it been in this canister ever since and I am only seeing it now? I smile. Yet another gift from my long ago self. This is starting to feel like a magical scavenger hunt! 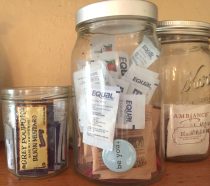 When I sat down at the table by the window, I remembered that before I left home, I had purchased and downloaded (on a whim!) a recording from Sounds True. This album is Seth Godwin’s “Leap First: Creating Work That Matters.” I click the play button, lean back, sip my coffee and listen.

One of the segments that plays in the first few minutes is called “Finite and Infinite Games.” Seth talks about the difference between a “finite” game like soccer in which there is a winner and a loser, and an “infinite” game like catch in which we play to support one another and there is no winner. When we play catch, “we play to play.” Seth goes on to give the example of Philippe Petit who walked a high wire between the two twin towers, not to win anything, but as Seth says, “He did it to put the ball in the air so someone could catch it and throw it back.”

Seth continues, “When we contribute to the network, when we feed the network, hoping that the people we change will play along and throw the ball back, then the game gets to continue to be played.”

THAT is what happened here at the cabin with my parasol, my heart note and my “Be You” button which I had hidden on previous trips for people to find! Those strangers who discovered my offerings could have slipped them in their pockets or purses and carried them home as mementos from their trip. But they didn’t!

I am imagining an elderly gentleman, finding that “Be You” button on the pillow and chuckling to himself as he placed it on the side table before going to sleep. I am imagining him the next day as he readies the cabin for his departure. He sees the button and gets an idea. He unscrews the top from the clear glass sugar canister and plops the button in there, thinking how much fun it will be for someone to find one day as they are reaching in for a packet of sweetener.

I am remembering Lisa, the awesome woman who hired me as a coach because she wanted to create something wonderful and playful in the world. She wanted to offer a gift to strangers. She got the idea to stand on the street holding a sign that read “Be You;” and she made some buttons to hand to people. Lisa sent me some extra buttons so I could give them out. That’s how one found its way to Josephine’s Cabin. That’s how it landed on the pillow for a stranger to find. That’s how it ended up in the sugar jar! (Added sweetness.)

Those folks who found my little loving gifts all “played it forward.” And now, here I am, the recipient of my own loving gifts; but also, they are gifts imbued with the playfulness and love of strangers.

Author’s note: This essay is writing itself in short spurts as I am living it. It is a game! Here’s what happened next – after I thought it was time to wrap up the piece!

After I wrote the section on “playing it forward,” I set the computer down to have a sip of coffee and some cinnamon toast. I realized I wanted to play right now. But I forgot to bring any notecards or buttons or parasols or chocolates. (I usually like to leave small squares of chocolates on the newly made bed – on the pillow like they do in hotels.) I didn’t bring anything to leave, nothing to play with.

When I packed for the trip, I put Pam Grout’s “Thank and be Grateful” in my backpack along with the fiction book I was reading, “The Way the Crow Flies.” As I was walking out the door of my house I spontaneously grabbed a third book, “The Collected Works of Florence Scovel Shinn,” and also tossed it in my bag. Now I spied that Shinn book. I could leave it as a gift under the bedspread after I make up the bed with fresh sheets and pillowcases. It could be my “play it forward gift.” I didn’t have any cute notecards with me like usual, so I grabbed a sticky note and wrote, “I am playing it forward by leaving this book I love for you to find. I hope you enjoy the game.” After I stuck it to the front of the book, I realized there are pieces of paper in the book. I should remove them before leaving it. 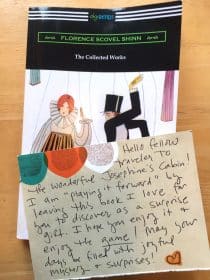 The first thing I pulled out was a birthday card from my son’s dad, Bob. I tore off the cover and used it as a notecard! (The significance is not lost on me of how the last time I was here I wrote a long letter of gratitude and appreciation to Bob because he has been an amazing source of love and goodness in my life.)

I pulled out the second piece of paper and it was a blank note from Curly Girl Designs that reads, “I am fairly certain that given a cape and a nice tiara, I could save the world.” There is a girl on a bike, legs splayed out in joy, the word “wish” on the basket, the word “shine” on polka dots. I considered writing my note on that. But no…I decided to leave that blank sheet for the next person to find and they can play it forward with a note to the person after them!

Author’s note: I’m hoping you see how multi-layered this is, like the best strudel – layer after layer of love, slathered with buttery joy in between each layer!

This is what happened next:
I walked outside to stretch and smell the fresh just-rained air and I had an idea. When this piece publishes, what if I asked YOU to play it forward and share in the comments what you did and how it felt? Then we can ALL keep playing this infinite game!

Seth created this audio because he wanted to offer some teachings to the world and Florence Scovel Shinn wrote her book and Lisa made those “Be You” buttons and someone made those whimsical parasols.

I caught those balls and now I am tossing them to YOU!

Did you catch one? Will you toss one ahead to someone else?

What does the game look like as you keep the ball in play?

Please comment below if you “played it forward” after reading this. I would love to hear what you did to join the game and how it felt to play!