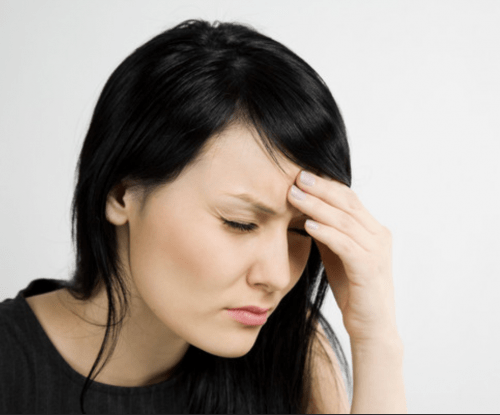 "I got out of bed and was still a bit dizzy. I couldn’t seem to shake the feeling."
photo by www/flickr.com

Recently I joined a new company and was going a million miles an hour trying to get up to speed; visiting the 17 states that fell under my responsibility, getting to know my internal colleagues and external business partners, along with building and mentoring a team of 5 managers who reported to me. Additionally, I was tasked with interviewing candidates for an open role on my team. To say that there were not enough hours in the day was beyond truth. I was on a plane every single week for 4 months straight and trying to make everyone around me recognize that I was indeed a great hire – and I was thoroughly exhausted. At one point, I just broke down weeping in front of my computer, then wiped my tears and forged forward. Finally, 6 months into the role I felt like I was finding my stride. I had re-organized my team; everyone was working fantastically together; I had visited the majority of my states; I had built great relationships with colleagues and I had an offer letter set to go out to my new hire. I was happy to be able to focus on getting to know key stakeholders in other departments within my company. Now, I could take a small breath of fresh air.

And then the unthinkable happened. My company implemented the largest restructure in its history. Although I was grateful to land on my feet, I was slotted into a new role to head up a brand-new department that didn’t exist yet. Back on the treadmill I went. I was temporarily performing my current role full-time, while creating a whole new role and a new department of direct reports. I was embarking on something that never existed before and was extremely stressed out about whether my ideas and direction would be the correct course of action. Or would I fail?

I was grinding my teeth like a madman in my sleep and having endless dreams about work every night. I would wake up as exhausted as when I went to bed. Although I wear a night guard, it didn’t seem to be doing much. My jaw slipped out of alignment one day while I was munching on a power bar (ironic!)

Right around that time, my boyfriend invited me to go away with him on vacation to Myrtle Beach, SC for a week which was just what I needed. That week, I ran lots of errands and packed (way too much, of course). Summer was also coming to a rapid close and my cousin had invited me to his pool the day prior to my trip. I desperately wanted to go because there were few sunny warm days left here in New York. I panic at the end of summer because I love it so much and New Yorkers get 12 summer weekends if we are lucky.

And then it happened. Saturday morning my alarm went off as I was planning on taking an early morning Barre class prior to hitting the road to drive an hour and half to my cousin’s house. I rolled over to shut the alarm off and the room was spinning uncontrollably. I had never felt anything like this before. I thought perhaps I had just been deep in sleep or in the midst of a dream when my alarm went off. I got out of bed and was still a bit dizzy. I couldn’t seem to shake the feeling. I went to the Barre class anyway (can you tell I’m an overachiever yet??) and everything seemed OK – until the end of class when I sat up. The room started spinning to the point where I had to put my hands on the ground to keep from falling over (and I was sitting crossed legged on the floor)!

When I got home, I researched what could be the cause of this vertigo. I discovered that teeth grinding and having a misaligned jaw could trigger this as it’s all connected to the inner ear. I felt better about that. I thought it might be the stress of everything at work and figured a day at my cousin’s pool would do the trick. Part of me thought about staying home, thinking not driving an hour and a half each way might be a more sensible move. I also thought perhaps going to urgent care and getting it checked out would be a better option. But I’m not sensible. All I could think about was how pissed I would be if I missed a sunny day at the pool. If I crashed my car, from vertigo, then that would be another story. So, I went, hoping the day in the pool would end the vertigo.

It didn’t. The drive was fine, but once I got into the pool and put my head back on the tube I was floating on, the world started spinning again. I was starting to get concerned at this point. So, I got drunk instead. I felt pretty good by the end of the day and figured that did the trick. I drove home (sober) with no issues and got up to go to Pilates in the morning, before the 12-hour drive to South Carolina. I felt fine throughout Pilates, until the very last moments of class when I stood up to stretch and tilted my head back and the world starting going round again – so badly that I collapsed on the floor.

The instructor and a couple of people from class came over to see if I was OK. I explained my new vertigo issues and they told me to rest a while. I did, felt better and continued home. At this point, my mind could have gone for a wild ride to crazy town. I could have headed to urgent care, called my parents, cancelled my vacation and a million other things. But luckily with the Jungian Psychology work I’d be doing, I knew this would be a needless panic attack. I’d panicked 2 years prior when I had very serious pains in my side, rushed off to urgent care on the July 4th weekend and missed a family pool party. I spent hours in urgent care with the doctors all agreeing that my appendix had burst. They even had the holiday “on call” surgeon ready and waiting to cut into me to remove my appendix. After spending the majority of the day having further tests done, the results came back – my appendix was fine – I was just constipated. Not only was I embarrassed, I was exhausted from a day of gulping horrible white goop for tests, being poked and prodded and the pain still hadn’t subsided. AND I missed the family gathering for the start of summer. (A precious sunny summer day, wasted!!!! Ack!)

I wasn’t going to go down that road again. My mind was calm (albeit dizzy) and I thought it would be causing mayhem to do anything other than finish packing and head out on my much-needed vacation.

I nonchalantly mentioned to my boyfriend about the vertigo when he picked me up. He kept saying, “Well, that’s not good. That’s not good.” I brushed it off. The crazy dizzy spells continued for the next few days, anytime I tilted my head to the left and back. I didn’t make a big deal about it, but I must have been quite a site, standing bracing myself like an 80-year-old woman, saying, “Oh, it’s just my vertigo acting up.” But I absolutely refused to let my mind go to crazy town over this.

My boyfriend barked at me every time he saw me check my work phone for emails or calls. Barking is his way of saying, “I love you and I’m worried about you.” It’s a special male language that I had to learn how to translate. “Put that phone down!” “What the hell are you doing checking your emails!!! Stop it!”

And after several days of sunshine, beach, lots of sleep, good food, fun, laughter and a plethora of barking every time I picked up my work phone, I woke up one day and the world finally stopped spinning. I was back to “normal” and grateful to say my voice of reason, my boyfriend’s care and a lot of R&R proved that this entire episode was caused by months of stress. I had been trying to get up to speed, worrying what people at work would think of me, trying to be the best, most efficient, brilliant manager and on and on. The most insane part of this was that it was all a manifestation of MY OWN MIND. My manager and colleagues didn’t put this pressure on me. I DID! Childhood conditioning of having to be the smartest, best, most perfect, hardest worker, etc., caused this. After months of me being relentlessly hard on myself, my body and mind finally said, “ENOUGH!!!!!!!!  If you won’t create balance in your life, then we will show you how OFF balance you are right now!” Hence the carnival ride my vertigo took me on. Symbolic, yes. But luckily, I speak symbolism pretty darn well – almost as well as my Man Language skills.

The mind-body connection is very real and most people ignore it. Instead, people rush off to doctors, urgent care, surgeons, etc. Now I’m not saying that we don’t need medical care, but emotional stress manifests itself in incredible ways. The first step is to pause, listen and take a breath. Slow down. Look into what may be causing the issues and make adjustments. Create a more balanced lifestyle. We tend to think that we are superheroes and can accomplish anything; but just as importantly (if not more importantly) we need rest, relaxation, happiness and joy – whatever form that takes for you. Additionally, many of us are also running on fear – “What if my company doesn’t think I’m the best candidate? Will I lose my job?” So we overwork ourselves, worry and create our own chaos. Relax…take it one step at a time.