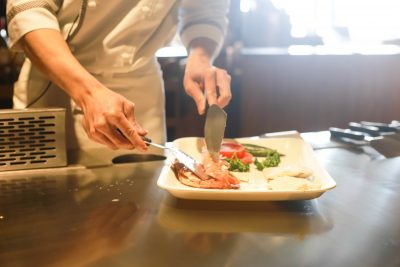 "He was going to fail because he wouldn't let it go! "
photo by www.maxpixel.net

While I was enjoying my early morning coffee, I took the opportunity to catch up on one of my favorite indulgences: Food Network Star. Okay, it’s a reality show and I love it (confession made).

One of the chefs provided a brilliant example of the negative and often tragic results of hanging on until it kills you!

He shopped for his groceries and chose a premium cut of steak. He was so proud of his choices and spent time bragging about how clever his choice was and how he would crush everyone else.

Well, surprise twist – the chefs had to switch groceries with each other. The “I chose the expensive steak therefore I’m going to win.” chef ended up with a cheap and tough cut of beef and that’s where his downhill slide began.

He pouted, he was angry, what was he ever going to do with this gross steak? He lamented his loss over and over again. He thought he was doomed to failure because he didn’t have his chosen steak.

Yes, he was going to fail, but not because he had a less desirable piece of steak.

He was going to fail because he wouldn’t let it go!

At one point, I even said it out loud: “Let it GO!” He had every opportunity to choose to be happy with his new cut of beef and accept it as a challenge to create a delicious dish for the enjoyment of the diners. Instead he chose to hang on to the past. He created a lousy dish and excused his terrible cooking to the judges by telling them how he had lost his expensive steak!

The connection between not letting something go and failing is very real. When you hang on to something, you leave no room to be creative and successful. Your eyes, your mind, your hands, your voice are all connected to something that happened in the past. And that’s unhealthy.

Letting go is the first and most important step to be truly happy, creative and enjoying the moment. Choose not to be that chef. He fueled and ensured his failure by holding on to the past and not moving forward.

Choose to Make it a Great Day!