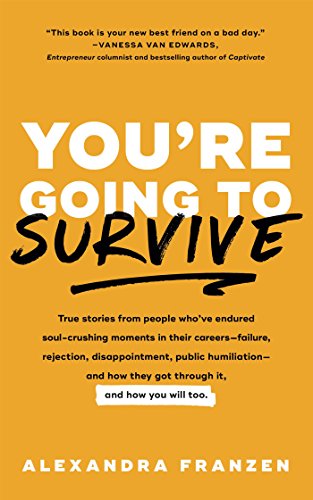 Dear KOM-ers! We’re so happy to feature this book giveaway!
Please enjoy this excerpt from “You’re Going to Survive” by Alexandra Franzen.
Leave us a comment to be eligible to win your FREE copy!

Feeling discouraged about your career? Maybe you’re dealing with a frustrating client, a product launch that didn’t work out so great, or a painful 1-star review. Maybe online trolls are mocking your latest project or maybe you applied for your dream job and you didn’t get chosen – again.
This book is for those tough moments when you could really use a friend. You’ll find encouragement, humor and inspiring true stories about turning defeat into big opportunities. It’s available on Amazon, Barnes & Noble, Books-A-Million, and IndieBound.

Excerpt: “Be a Lighthouse”

When Maggie Reyes started her blog, she had exactly zero readers. OK, not zero. She had one reader. Her sweet husband.

Modern Married – Maggie’s blog about falling in love, staying in love, and “creating a life that you love with the love of your life” – was born.

Maggie started blogging and posting inspirational love-notes on Facebook – notes which, initially, were read by basically no one.

I asked Maggie, “How did you find the motivation to keep writing even though nobody was paying attention at first? Most people get discouraged and quit when they feel ‘invisible.’ But you didn’t. You stuck it out. How come?”

“And eventually,” she continued, “a few people started seeing what I was doing. They started sharing it with their friends. Then a few more. And a few more. Word spread. And now, a few years later, I am that lighthouse!”

Today, Modern Married has a community of over twenty-five thousand appreciative readers and Facebook fans. Maggie was named one of “the relationship experts to watch” by The Gottman Institute – an award-winning company that collects data about marriage and divorce. She’s been quoted in publications like Brides magazine and Martha Stewart Weddings. She also runs a thriving practice as a life and relationship coach. It’s her absolute dream job – she gets paid to help couples stay in love and build even stronger, happier marriages. How cool is that?

Maggie is officially living her dream – and it all happened because she decided to operate “as if” the world was already listening.

The moral of this story is pretty darn clear:

You have to perform like a musician rocking out to a packed stadium, even if – in reality – you’re playing to an audience of two drunk guys who are Tindering on their phones and barely paying attention.

Don’t complain about “not having enough fans.” That’s totally unproductive. Instead, decide that you’re going to be a lighthouse – beaming love, positivity, great ideas, and awesomeness into the world.

Beam, beam, beam. Shine, shine, shine. Show up and do your thing – post your article, sing your song, give your seminar, teach your class – acting “as if” you’ve already got thousands of fans. Even if you don’t.

One by one, the people who need what you’re writing, saying, baking, or making will show up, gathering to bask in your light.