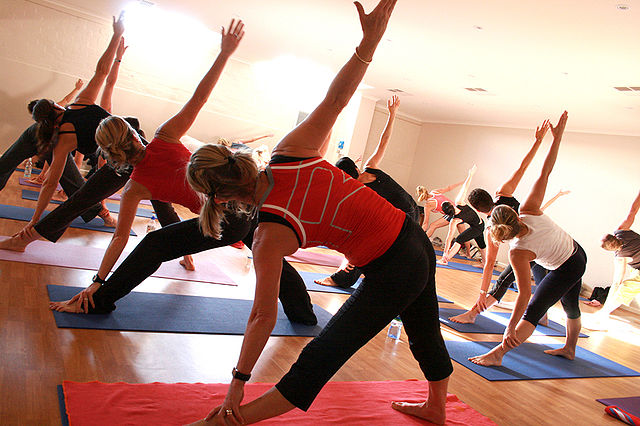 "Morning yoga was an opportunity and instinctively my heart spit out a response before my mind had time to whine about the early hour."
photo by upload.wikimedia.org

“Mornings are the most predictable part of my days. If you think there’d be interest in a morning class, I could teach it.” As the words came out of my mouth, my inner self’s jaw was dropping to the floor. Mornings are predictable for me because I hate them. I’m no good at them. Waking up is hard for me. Waking up early is really hard. Waking up and being “on” early could prove impossible.

But I put the words out there because they were the truth and the request they were responding to seemed worthwhile. The wellness program at work wanted to expand its offerings and start yoga classes at least once every other week at a new location.

Morning yoga would be one of a slew of new options at the site. Knowing what type of yoga (challenging) and what type of yogis (trendy and bendy) are frequently seen in the media, I wondered if anyone would show up. The employees here are more often found at Taco Tuesday than the gym, though they do have physically demanding jobs. For many of my potential students this would be their first experience with yoga.

I was introduced to yoga in my late teens/early twenties but didn’t begin a regular practice until 2012, which in the grand scheme of yoga is not so long ago. I fell in love with the physical challenge, the mental focus and the inner peace it cultivates.

Even if the poses are the same, no two yoga sessions are ever the same. My body might feel strong one day and sluggish another. My mind might race from one thought to the next (so much to do!) or quickly calm down as I center on my breath. There are days when balance is off, hips are tight or attitudes are bad, and yes, there are days when my body (or mind) refuse to do a certain pose. There are other days though, when poses flow with the breath, hidden strength comes out or the full expression of a pose is suddenly attainable. On those days, when there is a sweet balance between effort and ease, my spirit soars. Every time I practice I am reminded how amazing my body can be, even when it’s simply doing all the little things it does for me every day.

Feeling the positive impact of yoga in my life led me to earn my RYT-200 yoga teacher certification. I wanted to share that journey with others. In the two years since I graduated though, I’ve rarely been able to use it. Morning yoga was an opportunity and instinctively my heart spit out a response before my mind had time to whine about the early hour.

The night before my first class I crawled under the covers at 10 p.m., a very reasonable time my early-bird co-worker told me. The alarm was set for 5 am. I then proceeded to read until nearly midnight. My nerves were keeping me awake. I forced myself to close my eyes, lay still and relax. Yogis out there probably recognize this pose – shavasana, the final resting pose. While I eventually drifted off, sleep was a fickle friend that night. I’d wake up and fervently check the time, terrified I’d overslept. When the alarm finally buzzed, I was awake, waiting for it. I got ready, following the checklist I’d made to ensure I didn’t forget anything.

Of course I ended up forgetting a few things, but the most important thing made it to the mat on time that day – me. Five students showed up for the first class. No one looked thrilled (well, one lady did), but everyone showed up. They took time for themselves, time to honor and strengthen their bodies and minds. That gave me hope.

As more classes are held and the rhythm sets in, waking up and teaching class will become easier, as all things do. Hopefully more people will come, too. On the hard days though, I’ll remember that this is good for me – and for the five brave souls who kindly and openly met me on the mat for that first morning class.