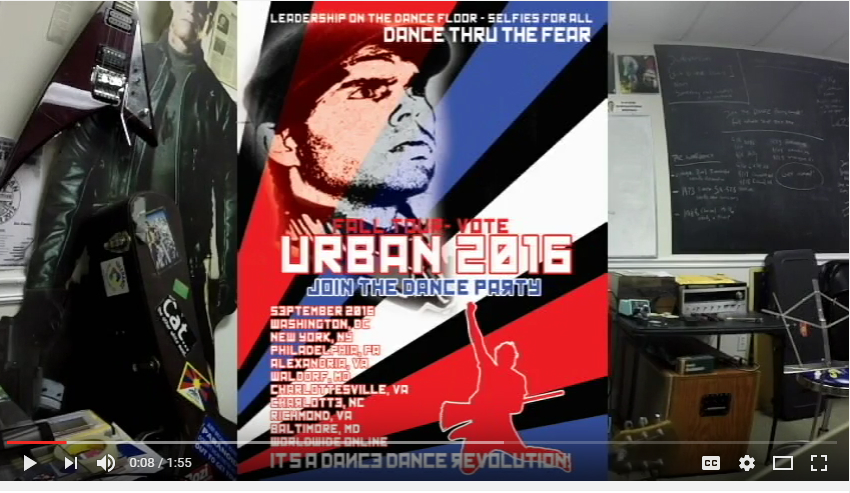 "Get in the video! Record yourself dancing (preferably to the official tour song), and tag it to #JURT on social media."

Josh Urban is one of the kindest guys I know, and now you can join his kindness dance party! Check it out and join the dance party!

It’s a funny time for a message of unity.  A peculiar time to talk about song and dance when it feels like the sky is falling.  But maybe that makes it exactly right. Maybe with a little laughter, we summon courage to take our power back.  Maybe by playing the blues, we lose the blues.

Meet musician Josh Urban.  He plays a home-built broom guitar and DJs on the street.  Spoofing the red-hot political season, the seemingly-endless stream of bad news, and sharp polarization between communities, he urges you to join the dance party.  Traveling by train along the east coast, he’ll be bringing a mix of rock and dance music to the street corner, subway, hospital waiting room, and traditional venue while engaging a worldwide audience through livestreaming and social media.  The idea:  make a music video with the world called “Dance Through the Fear.”

Running September 9th through the 25th, The Dance Party tour is an interactive experience designed to bring some levity into the world, because sometimes the serious problems need a lighter contrast to remind us of our humanity.

Get in the video!  Record yourself dancing (preferably to the official tour song), and tag it to #JURT on social media.  You’re encouraged to hold up a paper as you dance with a fear written on it, be it terrorism or the neighbor’s dog.  Send it to josh@joshurban.com and it’ll be mixed into the official tour video at the conclusion.  Let’s make a stand – let’s dance!