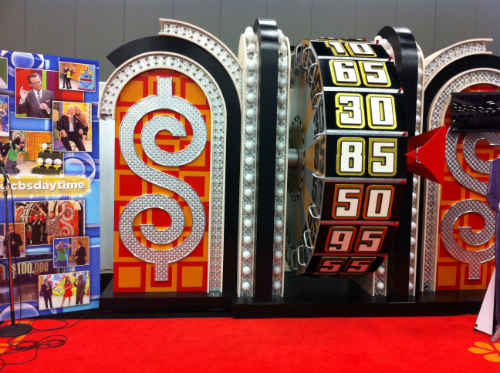 When I was younger I knew the prices of vacations to Puerto Vallarta, shuffleboard tables, and Windex. I made sure everyone knew I possessed this knowledge. Was I a weird kid? No doubt. That fact aside, I was also a self proclaimed Price Is Right expert. It was a title I proudly owned. I loved watching the people roll the dice for a car, dreamed of sending a Plinko chip down the board, and sang the Yodeling song along with the mountain climber. This was mainly because, on the days my mom would have to work during the summer, she would drop me off at my Grandparents’ house. Then, every morning at 11 am, we would watch The Price Is Right. My Pop-pop and I would cheer along with the crowd, obviously pass on the first showcase showdown with the furniture (because the next one obviously included a car), and hate the people who would guess $601 after the previous contestant guessed $600. Seriously. Those people are assholes. They are the people who take 20 minutes to order at Starbucks, or steal the parking spot that you’ve been waiting patiently to use, or think sitcoms on CBS are funny.Nonetheless, I have very fond memories of watching Bob Barker ask people to spay and neuter their dogs while eating peanut butter and jelly on my grandparents’ recliner. That being said, I haven’t watched it in years. I know Drew Carey took over, and I can only assume his sign off is “And Remember Everyone, Cleveland Rocks.” Yet whenever I see an anecdote about this show, nostalgia sets in and I am sucked into the story. This past week the greatest story to come out of The Price Is Right emerged on the internet. A beautiful woman, Danielle Perez, who is a wheelchair user, was called up to the stage. That should have been me! If I read that she played Plinko, shit would have gone down. She did not. Instead, this double amputee’s prize was a treadmill. Now Danielle took it all in stride…no pun intended… and was incredibly sweet. But, the situation made everyone as awkward as humanly possible. I think this is because people are still afraid to laugh at disability. I feel like this became a huge story not because of it’s pure comedy gold, but rather that they feel The Price Is Right somehow offended her. It didn’t. Promise. It’s okay to laugh.

While Danielle was adorable, I think I would have taken the opportunity to make as many jokes as humanly possible. Since I doubt that I’m ever going to be on The Price Is Right, and I enjoy making people uncomfortable, I’ve come up with dream prizes (and what I may say to Drew Carey, if it were to be my prize).

I doubt any of these prizes, or me, will ever be on The Price Is Right. So, I just have to go onto Family Feud, where they asked 100 people, “Name something you think about while running.”