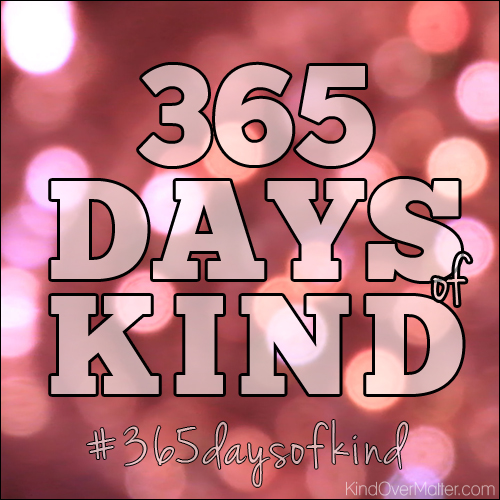 Somewhere along the way, I apparently mis-numbered my 365DaysofKind posts. I realized it around the middle of the year, but anyone who knows me knows there’s no way I’d take the time to figure out where it happened, let alone go back and renumber them all! The result is a few extra acts of kindness, and so much more.

In late 2013, I came up with the 365DaysofKind idea. I genuinely loved the idea, but to be completely honest, it was also motivated by some fear. I felt like that little girl on the playground who just wanted to get picked for a game at recess, and just wanted the KOM audience to like me. I wanted to be accepted into this amazing community that Amanda created.

I’ve learned that this community is absolutely the kindest on the internet. Truly. Not only did you all warmly welcome me, the size of the KOM’s Facebook, Twitter, Instagram and Pinterest communities grew this year. For a girl who had never even written a blog post, let alone run an amazing online magazine, this felt incredible, and 365DaysofKind was a big contributor.

I’ve learned that small things make big differences, and that lesson has come in a couple of ways. The most obvious way, was the appreciation I saw when I did small acts of kindness. Whether it was cleaning up at a friend’s house after dinner, or letting someone go in front of me in a line, people were grateful and often surprised. Several months into this project, I realized my thinking had changed. Not only was I ensuring I did a kind act each day, but how I approached every situation started to shift. I began to choose the kinder action and the kinder word. When I first noticed it, it still felt intentional, but in the months since, it’s become more of a habit. I smile at more strangers, hold more doors and always return my carts at the grocery store! Small things, that just may make a positive difference in someone’s day. They sure do in mine.

Probably the most important thing I’ve learned, is to prioritize what I’ve come to call “self kind” acts. Early in the process, I coined Selfkind Saturdays, quite frankly, because I needed them. Working full time, becoming a Certified Life Coach and running this blog was a lot of work! I realized that I needed a break, and Selfkind Saturdays were born. They became a day to focus on me, do something that filled me back up so that I could keep doing all of the things I love. What a lesson! This lesson has become a significant part of my coaching work, and the inspiration for some courses I’m working on!

My #1 lesson from the 365DaysofKind project is that if you are kind to yourself, and you take care of yourself, your capacity to be kind everywhere else increases dramatically.

Thank you, all, for your comments, likes, shares and support for this project. Thank you for welcoming me into this community and thank you to the new KOM-ers who have joined me in this incredible community.

…and as always,
Thanks for being on this journey with me.