Post by Katherine Ellis for the Kindness in Business series. 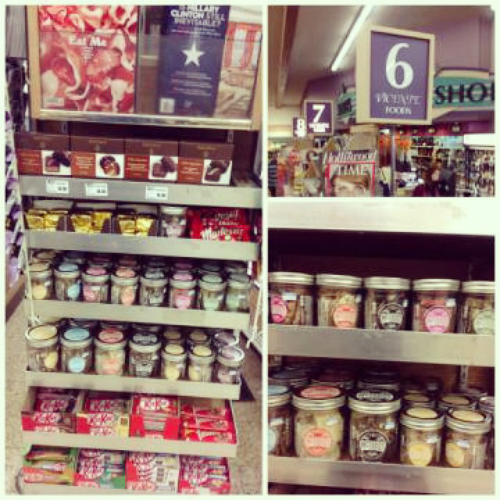 I started my toffee business in April of this year. It was five months after crucial surgeries on my back gave me a new lease on life, and four months of isolation gave me thoughts of reinvention.

Realizing my eyes’ ability to focus was very limited, the cute marble shelf from West Elm lined with my choice of books was now just a cute shelf from West Elm, I swiched gears… first to obsession. I’d turn over a recent breakup of a long-term relationship, picking it apart moment by moment, much like picking meat off a sucked-down bone. Since most people were off having what they called lives while I sat around thinking and trying not to think (see Chit Chat of the Monkey Mind). I’d imagine family members and friends passed on (cheery, I know), how spiritual I was for being calm going into surgery, then remind myself I was heavily-dosed on pain medicine and not as spiritual as I thought.

Always one for working with what I’ve got, I’d pick up my computer to try and write, hoping the medication (or the meditation) might give me creativity. When I failed at that miserably, I daydreamed; and finally, I’d lay around knocked out watching movies and shows on Netflix.

After a couple weeks of that, I felt like a bump on a log and pulled my mind towards productivity. If my body couldn’t accomplish things, at least my head could plan them. And plan, I did. Back to obsession!

Full circle, baby: I couldn’t stop thinking about having my own business. Since I had decided to not be an actress anymore (suddenly and unsurprisingly, dramatically), I had a string of low-paying jobs, most of which caused me to take a look at how I fared as an employee. To make a long story short, I wasn’t a good one:

I was more often late than not.
I always wanted to leave early.
I didn’t take criticism well.
I judged my employers’ job skills.
I quit and moved onto the next job on the change of the wind.

And that was just for starters.

At least I was being honest with myself. If I wasn’t a good employee, what was I? A self-employed boss, that’s what!

The year before, my mom and I had talked about starting a business with her toffee recipe; me doing the work, her investing the money. Mom has been a successful real estate agent for four decades in the Palisades, our small town in the big city of LA. She has skills when it comes to contracts and is very charismatic upon meeting people; but what would really lure agents into the beautiful homes was the delicious spreads she’d serve every Tuesday! There was potato salad with homemade mayonnaise, shrimp cocktail with fresh dill sauce, three kinds of quiches; and a handful of times for the really big houses, an entire side of salmon perfectly poached (in the dishwasher)! A constant was something sweet: her famous nutty brownies, chewy chocolate chip cookies, made-from-scratch lemon fruit tarts, and in the final quarter of the year, homemade almond toffee.

She perfected the texture over several dozens of tries. It’s not too hard, nor too sticky. Hers was the only one I had tried until I started taking it around to events and being told by weary people who had ventured too many times to the dentist that it might break their teeth. I had no idea what they meant, since ours is crisp, but teeth-breaking? No way! One day, at a toffee place which has been a fixture in LA for many decades, I found out for myself. I almost splintered my canine tooth and had to spit the damn toffee out.

Back to my mom in those Palisades homes… the realtors would go nuts! Literally. But they weren’t the only ones. My mom had a friend who owns an antique store in the Palisades, and she would call Mom at 2:00 every Tuesday, the time Caravan ended, wanting to know what was to be done with the leftovers. Mom would always stop by and hand over a nice-sized bag of the good stuff.

As the barn-style door swung closed behind us, I’d pull on Mom’s silk sleeve: “Mom! What were you thinking? You should charge her money!”

“Honey, that woman refers every person who walks into the store to me. It’s worth much more to give it away than the measly five dollars she would give me for it.”

Business lesson number one, learned from Mom then and there:

The Cost of Things is Not Always Obvious

This summer, upon deciding I needed to redo my logo and labels, I hired a freelance graphic artist who did it on the side. His pace was slow, his mistakes many, but his work wonderful (when it was completed and he didn’t disappear for weeks). I hung in for a month, but my business was stalled because of it, and I decided I couldn’t take it anymore. I asked a friend for a referral. She raved about a friend from high school who did it full-time and had a partner. She said they were both also really nice. Great!

No, not so great. They did great work, certainly it was faster, and at first they gave me a discount off their fancy price; but when I realized we needed to make a couple more changes, they flipped the script, rushed through the work, and then charged me an arm and a leg for it. Upon print, I realized they copied and pasted something that wasn’t the same and cost me somewhere close to twice the amount the first guy charged for the entire design project. Those guys cost me more (time and money) than staying with the part-time disappearing act.

The Power of Grace

Mom would come home after a long day in heels, running from house to house, taking endless calls and complaints to stand in the kitchen for hours upon hours, often late into the night, ruling over a feast. Every counter was covered (neatly) with chopped vegetables, shrimp, bowls and whisks, pots going, the oven on… the result looked like a commercial kitchen that a staff of five people hammered out.

Mom limply fell into bed, the exhaustion on her face palatable; yet bright and early the next day Mom wore nothing but a smooth suit and an elegant smile. It was show time! She worked hard to make it all look so easy.

That is not something inconsiderable. As of late, I know just how difficult it is. I owe an apology to the blog for missing last month’s post, and especially to Lara. The truth is, I was in a constant state of rotation:

Hoist them in the car
Take them to an event
Realize you didn’t get your banner
Get lost finding the print shop
Pick up the banner
Drive back to the event
Realize you’re out of cards
Repeat.

I would love to say I did it all with ease and grace, but I certainly did not. To the contrary, I’ve been anxious, doubtful, sometimes over-the-top excited. Because of the nature of part-time work, I’ve had part-time commitment with employees coming and going. Mix this with the fact I know nothing about running a business or being a boss except for my limited experience having bosses, and watching my mom and dad execute their enviable work ethic. You double this by the fact my back pain can still skyrocket to a nine and stay there all day if I’m not careful, and you’ve got an anxious, worn-out mess that wouldn’t dare call herself ease or grace.

But, I’m learning. I’m growing. Each time I fail, I apologize where necessary, pick myself up and try to do better the next time. I realize everyone has a story, including when it comes to work and how they ended up there, and I try to focus on that instead of my own self-centered fear of things working out. It’s just life, but from another direction.

And Mom didn’t suck so badly at it after all.