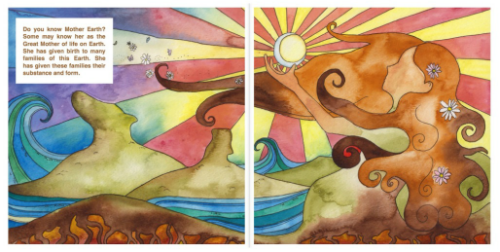 KOM is thrilled to have a fabulous book giveaway for the kiddos!
Comment below for a chance to win your very own copy of Amber’s Fairy Field Journal!  <3, Lara

What books have you authored so far?

My first creation was a bit spontaneous as I was frantically searching for the perfect Christmas/Solstice gift for my daughter. She is not materialistic and she loves to create. She was born this way. She is an amazing. As I searched for the perfect gift for this creative young girl I began considering the things she already had which never appreciated for example her pre made Barbie House. She found this boring and I’m not sure I caught her enjoying it, ever. It wasn’t that she was spoiled! I know this would be the first thought of a frustrated parent. Instead I began looking at the things she was enjoying. It seemed each year she could be found outdoors (if she wasn’t indoors browsing imaginative picture books and trying to decode the words in chapter books). She was outdoors empathetically creating nest for animals or so called little homes, in hopes that real life creatures would find them and enjoy them! She used natural things in her creations such as sticks, rocks, mud patties, water, dried leaves and things found in nature. I was careful to explain to her not to hurt any living thing as she created these nest and homes. She was learning to respect life and she was practicing empathy while she was playing. She was exercising her imagination and likely was soothing and loving our Earth Mother just as she deserves to be loved. Eventually through story telling this outdoor play developed into fairy play and she began building fairy houses. So, I began searching for resources! She loved writing and journaling, of course it was part of her creative nature! So, after a turning up empty handed after a quick search on Amazon, I began creating my first journal: The Fairy Field Journal for young children. I then created a second title for my son: The Little Folk Field Journal for young children (so he wouldn’t feel left out). With these two titles I decided to create a Facebook support group: The Fairy Garden Community Circle for families who also created fairy homes or fairy gardens because of course we are beginners ourselves and want to learn as much as we can!

After creating my first journals for my daughter and son I created my second journal: My Garden, Kitchen and Community Journal for young children and their families. While may daughter as outdoors playing I had began gardening simply from our porch as an experiment. The experiment was a success and had captured the interest of the children as well and I wanted to involve them but I feared I just didn’t know enough to teach them yet. So, the next year I decided to learn a thing or two from a little old lady down the street who seemed to be an expert! We became friends over time as I helped her tend her garden and she was generous to let me grow a few things while learning from her. I found that growing food wasn’t too difficult and rather rewarding AND not to mention I believed this home grown food was improving our health! I wanted a way to capture my learning experience and inspire my children’s interest as I prepare to participate in a community garden this year! So, I created this journal for us! I love that I was able to include our kitchen and community in this journal. And of course I created another Facebook support group: Gardening with our Children Community Circle.

What other books are you writing?

Even though I created these journals I knew that I was meant to create picture books stories with special messages for children. And I believe these journals are my ticket to creating my picture book stories. I have always known since I was 12 that I was supposed to write stories for children. But not just any story but a story with a message. I knew their was a message inside of me that wanted to be heard not only by me but heard by families of this Earth. Lucky for me, I found this message and began writing! Some stories even began coming to me in dreams!

Don’t forget to leave your comments below, for a chance to win a copy of The Fairy Field Journal!  Please include your email address in your comment.  Winner will be contacted on July 24th via email!