Post by Juanita Miteff for the Kind Kindred series. 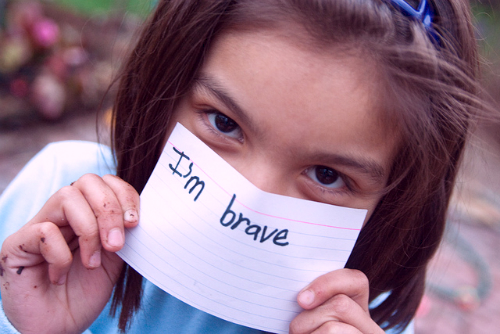 “Be brave. Take risks. Nothing can substitute experience.”

Nine months ago, I felt the stirrings of something new.

I had walked away from the classroom after eight years of teaching, both weary and jaded. I was tired of an education system mired in politics and endless administrative issues, as well as a draining work environment driven by pernicious gossip.

Only two words came to me, and I put them out there to God, the universe and my husband: “What now?”

It was then that Sara Bareilles’ song “Brave” blinked onto my radar. (God speaks in mysterious ways.)

I watched the music video over and over, letting the words wash over me as I imagined living the truth of those lyrics. What if I really DID stop holding my tongue? What if I stopped disappearing into the vortex of my fears? What if I just went for it? But what was “it” exactly?

It took me another four months to work THROUGH the numbness and anxiety of a bad experience, and to work UP the courage to put my plans (you know – those quiet “what ifs” that one has fizzing silently in the back of one’s brain) into action.

Spurring me into action was a rather startling revelation that I did NOT have to pay some institution to get more skills – I just had to learn to market the ones that I already had!

The fourteen year old chef’s diploma from Prue Leith’s College which, up until then, had only been used on my food blog (and my dinner table) became a micro-business selling gluten-free and paleo sweet treats at a local CrossFit box.

Sixteen years of practicing and studying yoga under a variety of teachers became community yoga classes at the local recreation center three days a week, which has since pivoted into a home studio offering group and private classes to a diverse range of students.

A random phone call from a retiring university lecturer who recommended me, one of hundreds of students who had passed through her classroom over her long career, as the top choice for replacing her in some part-time post-graduate courses allowed my Education degree and newly minted post-graduate diploma to get some use within the context of something I had ALWAYS wanted to try – teaching at tertiary level.

Rather than feeling frazzled in filling such diverse rolls, I suddenly felt energetic. I realized that, as a multi-potentialite, being pigeon-holed into a repetitive routine for so many years had been taking a toll on me emotionally, physically and mentally. Furthermore, my highly introverted nature had been unable to deal effectively with the hundred plus different personalities I had dealt with on a daily basis as part of my job.

Along with my newfound energy has come a feeling of connectedness, not only with myself, but also with my husband and family. As if I am operating as some sort of truer version of myself (Juanita – version 2.0).

Just as energy begets energy, I have come to believe that bravery begets more bravery. Exercise your courage to try your own version of something daring, whether it’s something big like a job change, or something smaller (but also scary) like learning to swim or ride a bike or learn a new language.

You know how Sara Bareilles wants to see you be brave?
Well, so do I.
And so do you.