Post by Nikki Starcat Shields for the Love for Love series. 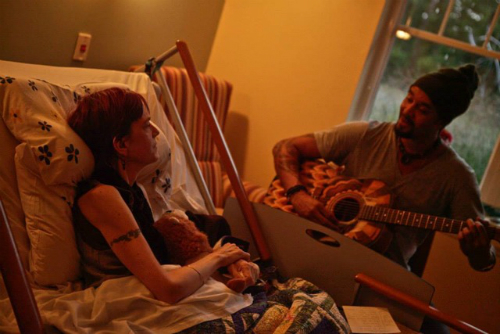 She called me on the Thursday after Labor Day, tears in her voice. “I wanted to tell you this in person, but I need your help right away.”

I’d known something was up. I hadn’t heard from her for most of the week, which was unusual.

My friend Jenn was dying of terminal breast cancer. She’d been diagnosed for the second time about a year before, and it had spread throughout her body by now. She was painfully thin. She’d had a short stay in the hospital over the summer, and received some palliative radiation to shrink the tumors in her spine so the pain wouldn’t be so overwhelming. But still, Jenn had seemed to feel a bit better in recent weeks. The previous Saturday she even felt well enough to venture out to the Farmer’s Market with me, picking out a few choice vegetables and taking pictures on her phone.

I shouldn’t have been surprised when she told me she’d decided it was now time to go to the hospice house. But I was, and I started to cry as she filled me in on the details. I knew she was really ready to go when she told me that her beloved Maine coon cat, Stewie, would be picked up by his new adoptive parents (who she had carefully chosen) the very next day.

My task was to speak with Michael Franti’s liaison at the Do It For The Love Foundation.

What?! Joy and excitement mingled with the tears as we gushed about this major item on Jenn’s bucket list.

She’d long wanted to meet her favorite musician, Michael Franti – perhaps you’ve heard of him. He’s a gifted singer and songwriter of catchy, upbeat songs with positive lyrics. A barefoot yoga-lover from California, tall and gorgeous. We’d been to several of his high-vibe New England shows over the years, and Jenn’s sister-in-law had tried to contact him the previous spring to see if Jenn could meet him.

It turned out he was coming to Portland the following week, and wanted to serenade her! Not only that, he’d recently started a foundation for the very purpose of “bringing people in advanced stages of life threatening illnesses, children with severe challenges and wounded veterans to live concerts.” Wow!

The arrangements were made for Michael Franti to visit Jenn in hospice the following Friday. She was worried that she might not be awake enough to enjoy it. It’s true, she was sleeping a lot and beginning to fade in and out of awareness.

One of Jenn’s clearest wishes was to die surrounded by her loved ones. I wasn’t sure what she would need from me, and we’d talked about it several times over the months. One of the things she kept saying was, “I just want you to be there with me, be present, and maybe do some soft drumming.” On her second night in hospice, I visited her with my partner. We brought along our drums and some percussion instruments, and at one point there were five of us in the room with Jenn, drumming and singing softly to her. She was smiling and drifting in and out of sleep. It was a beautiful, magical moment.

The next day I mentioned the impromptu drum circle to Jenn. She was confused and didn’t remember that we’d been there. On the drive home, I sobbed. I was losing her already.

The day of Michael Franti’s visit happened to be my birthday. A few of us gathered at the hospice house. Jenn’s best friend was already there, helping her get dressed up and ready. Jenn was luminous. So thin, unsteady on her feet, and stunningly beautiful.

When I’d thought about the visit, I figured Michael would come in, greet Jenn, and sing her a couple of tunes, then be off to get ready for his concert. Instead, he arrived with his guitarist and a photographer (a wonderful woman who was in tears with the rest of us by the end of the visit). They settled in and stayed with us for over an hour! Jenn was awake and lucid the whole time. Michael told stories, played all her favorite songs, and listened to Jenn. I mean, he really listened, with his whole being, fully present in the moment. Such kindness. For one song, Jenn insisted on getting up to dance, held on each side by her beloved friends. We all danced and sang and cried. 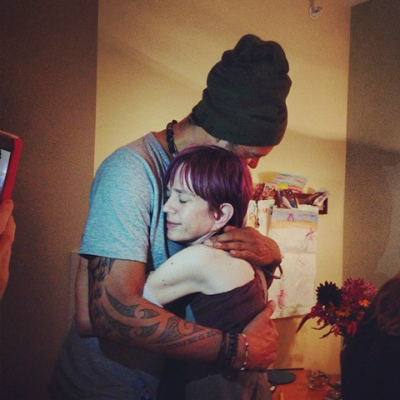 Someone mentioned it was my birthday, and I was serenaded. All of Jenn’s friends were given free tickets to the show that night. Jenn insisted that we go. Her step-sister chose to stay with her. It was a birthday I’ll never forget, and the part that was most poignant was that I was now leaving Jenn behind. We were nearly the same age, but I knew she wouldn’t make it to her birthday in October. I was now 44, and she would travel no further than 43.

The next week went by in a blur. I was at the hospice nearly every day, and Jenn’s best friend practically lived there. Friends and family came and went. Jenn’s room was filled with flowers, artwork, and photographs. Her musician friends serenaded her, and she received Reiki and polarity therapy every day. She wasn’t eating much by then, but people brought her sweet tidbits of food to enjoy. Some of Jenn’s relatives were concerned that it was all too much, but this had been Jenn’s wish. She wanted all of us around her. She didn’t want to be alone when she died.

And she was not.

Sunday was the Autumnal Equinox. Jenn’s polarity therapist had received an intuition that we should do a ritual of release for her on that day. Jenn’s room was packed with people. We chanted and prayed. She drifted. She hadn’t spoken much that day, but after the ritual she put her hands together in prayer mode and chanted her favorite mantra: Keep It Real.

Oh my lovely friend, it couldn’t get much more real than this.

I was there when she left us and crossed to the other side. That morning, everyone knew it was the day. Death is like birth, in that you can’t predict when it will actually happen. But we all felt it coming.

When I walked into the room that morning – and my words fail me entirely here, I don’t know how to say it without sounding cliché – I could feel the angels gathered all around Jenn’s bedside. I mean really feel them. They felt like bright white pillars of energy, connecting one world to another. Although I describe them as angels, that isn’t the full description. What I mean by that term: loving guides from a non-physical realm, there to help my dear friend’s soul make her crossing. Experiencing their presence was intense, uplifting, and sorrowful all at once. My heart ached and burst open.

Jenn died, as she had wished, surrounded by family and friends. I was sitting on the floor at the end of her bed, my hand on her foot. In my mind, the lyrics to a song by another of her favorite musicians, Mike Doughty, popped into my head. It made me smile through my tears.

And she did. Jenn released her last breath and flew off to another realm, one sunny early-autumn afternoon.

The sunset that evening was stunning.

I swear I could actually hear the sound of sunshine.