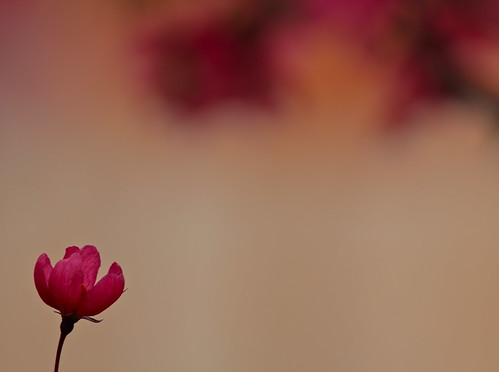 Against all odds … Envers et contre tous " by gmayster01 on & off …

Taking it All as a Blessing

My dad passed away several months ago. A few days after the funeral, my mom and I had to clean out his office at work. We waited until nearly everyone was gone for the day, and then we went in – holding our breath as we did.

He’d worked for his company for 35 years, and he always worked long hours. If ever there was a home away from home, this was it. Even though I’d only been to this particular office once before, the experience was highly visceral – walking the path he’d walked hundreds of times before from the front door to his office.

I didn’t let myself lean into tears at that time (although, looking back, I wish I would have). Instead, I set about the work of getting the task at hand done as fast as humanly possible. That is, until I walked around to the back side of his desk.

There’s something oddly intimate about the back side of a desk. A person spends so much time there; it’s easy to tell how they work – where the notes are, how the pens are arranged, when they couldn’t find a piece of paper and jotted down a note on their desk calendar.

My dad was a big fan of Flannery O’Connor. He even wrote his college honors thesis about her work. I think he was into Southern Gothic because, well, it probably felt a bit like home. He grew up inSouth Carolina and had a childhood that I could easily imagine captured by the likes of O’Connor or her peers: Faulkner, Welty, Williams.

Although I knew about this, I was still surprised to find a quote about her in his office. His desk faced the door, nearly filling the small office. And on one of the drawers (facing him, that no one else could see), I found this:

“an event perceived by the stricken
girl as a sign of God’s grace
equivalent to ‘a bullet in the side.
‘I can with one eye squinting take
it all as a blessing.’”

Well, knock me down with a feather.

Bullet in the Side

It wasn’t too difficult to assume what my dad’s bullet was – his cancer. But I wasn’t yet sure what O’Connor’s was. As soon as I got home, though, I looked it up. The quote was actually from Joyce Carol Oates in a piece she wrote about O’Connor for The New York Review of Books. The event she refers to?

And so I kinda began to feel like I was in a Southern Gothic myself.

There was something about the violence of O’Connor’s language that stopped me in my tracks. She described her own loss with the force I was feeling mine. I felt strangely as though my dad, O’Connor and I had entered into the same conversation, outside the bounds of time, space and the written word. As though somehow our shared experiences – all of us losing our fathers too young (my dad was only 15 when he lost his) — were commingling in a place where the only way to cope with a loss so staggering is to start looking for the good.

I wouldn’t say that I’m super great (read: at all great) at taking things as a blessing that I perceive to be bad. I certainly didn’t do that with my dad’s illness. As soon as he was diagnosed, I was outta there – and onto the internet, looking for any scheme I could to spare him.

And after he died, all I wanted was for everything to be over with: meeting with the funeral director, talking to people I’d never met at the visitation (or, worse, ones I had), looking for a Kleenex to hand to my mom. I methodically went from one task to the next – all towards the goal of getting away, closing the door, going to sleep, shutting down.

As I’ve pondered this quote since, I realize how my dad lived both sides of it – identifying as both the subject and object of loss. And when I thought about how he held both of those together, something spacious began to open up inside me. My awareness shifted from a single-minded focus on pain to an expanded field where pain coexists with pleasure, darkness with beauty, loss with blessing.

As I peeled away the quote my dad had taped to his desk, I noticed how old the tape was. And how faded the paper it was printed on was. This clearly wasn’t a new addition – nor a haphazard one. It was neatly taped in line with the edge of the desk drawer, adding a certain symmetry to an anything but neat situation.

One of the things that makes O’Connor’s work compelling is her contrasts – violence amidst an everyday backdrop, the wrath of god equaled only by the love. In the midst of this experience that defied classification, my dad chose to find his daily inspiration in the gray areas, taking the good with the less good. Feeling fully the weight and slowly the gift.

As the realization of my dad’s choice sunk in for me, I realized how I might be able to do it, too – shifting what I’d wanted to stay in the margins into the center. Letting this experience break me open and redefine me in a way that left me more compassionate, more loving and more wholehearted.

Our cleaning task ended up taking hours. It turned out that my mom had the opposite reaction to me; she wanted to stay as long as possible. The last thing we had to do, which I could hardly even look at, was turn out the light and walk away. As we did, my eyes had to adjust to the brightness of the rest of the building.

With one eye open and the other slowly making its way to join it.